A Dark Cascade at Sulpicius Gallus 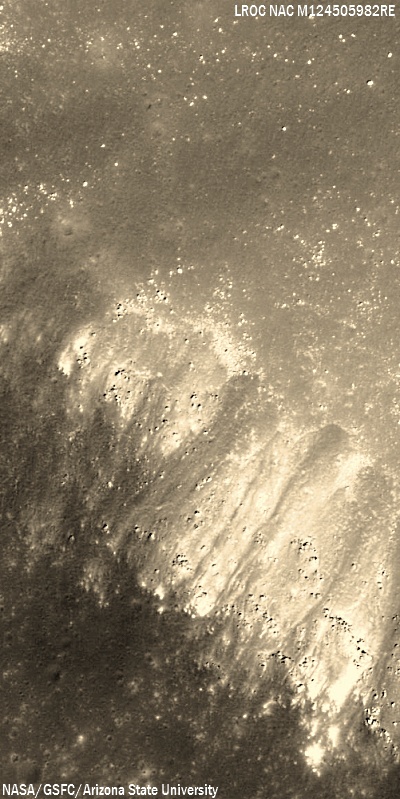 Although there are hundreds of sites on the Moon where explosive volcanism has occurred, there are several regional deposits of pyroclastic material that are especially extensive. These regional pyroclastic deposits include sites at Rima Bode, Sinus Aestuum, Mare Vaporum, and Sulpicius Gallus, and are collectively called "dark spots" because of their very dark appearance in telescopic images.

All of the regional pyroclastic deposits have largely rock-free surfaces that are thought to have large concentrations of micron-sized glass and partially crystalline spheres, similar to the glassy materials sampled by Apollo 17 astronauts at Taurus-Littrow Valley. These deposits likely formed in explosive eruptions (or "fire fountains") involving magma and some kind of volatile component. Both carbon monoxide and water have been considered as the source of the gas that drives such explosive eruptions on the Moon. 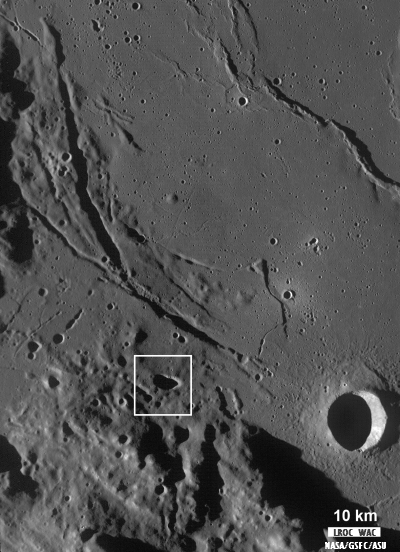 LROC Wide Angle Camera (WAC) monochrome mosaic of the Sulpicius Gallus region along the southwestern interior of Mare Serenitatis. The suspected volcanic vent is at the center of the Constellation Region of Interest delineated by the white box. Rima Sulpicius Gallus cuts through the area immediately to the north and a number of domes are also visible. (NOTE: Charles Wood, curator of the invaluable Lunar Picture of the Day (LPOD) website, provides detailed and experienced insight into this latest LROC WAC image HERE.)[NASA/GSFC/Arizona State University].

Where are the volcanic vents that were the sources of these widespread pyroclastic deposits?

Source vents for many of the larger pyroclastic deposits are difficult to identify, partly because they may have been mantled during explosive eruptions and/or buried by later volcanic material. In some cases, fractures, oddly shaped craters, or irregular depressions have been suggested as possible source vents. Such is the case for at least some of the pyroclastic material in the Sulpicius Gallus region, a Constellation Region of Interest, where a 5.5-km long "kidney-shaped depression" is considered a prime candidate for a volcanic vent.

This irregular depression was first noted by the crew of Apollo 17 as they looked down at the Moon from orbit. The fact that it lacked the prototypical features of an impact crater (raised rim, bowl shape) and that its walls and surroundings had an orange/red color similar to the orange pyroclastic glasses that were sampled at the Apollo 17 landing site made it quite distinct from the typical impact crater.

The LROC Narrow Angle Camera view of the wall of this suspected volcanic vent is similar to what the Apollo 17 crew would have seen from in orbit, albeit at higher resolution and in black and white (we rely on the LROC Wide Angle Camera for color).

In this image, the dark pyroclastic mantle at the surface has mixed with rubble and soil from the mare surface to create a small landslide or debris flow (~60 m wide) that has flowed down the wall onto the floor below. Several smaller flows can been seen and more coherent rocky layers are also observed at intervals within the wall, probably representing buried mare basalt layers.

The pyroclastic beads at sites such as Sulpicius Gallus are of high interest to lunar scientists for several reasons. They contain trapped hydrogen and Helium-3 from the solar wind, and these materials could be of high value for future in-situ energy production on the Moon. Enrichment of volatile elements such as sulfur and fluorine also have been measured on the surfaces of many of the pyroclastic beads in the Apollo sample collection, suggesting that these beads could provide lunar inhabitants with sources for these relatively rare elements. Finally, the glassy deposits are also rich in iron and titanium, which are of immense economic and engineering value to future lunar explorers.

Scroll through the full-resolution NAC frame here!
Posted by Joel Raupe at 8:22 AM