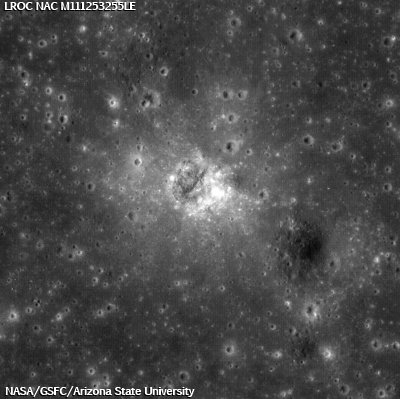 Possible impact site of China's first lunar orbiter Chang'E-1, at or near 1.5ºS, 52.36ºS, 0813 1 March 2009 UT. LROC Narrow Angle Camera (NAC) observation M111253255LE, LRO orbit 1529, October 27, 2009; (Slew angle 7.64º, emission angle 9.55º) Resolution 0.53m, image width 624 meters [NASA/GSFC/Arizona State University].
(Xinhua News Agency) China's space agency has set up a committee of 123 leading scientists to consider how the country might apply the vast amount of data acquired by China's first lunar probe.
The project had resulted in data about the distribution and content of important elements on the moon, such as uranium, thorium, potassium, aluminum, silicon, iron and titanium, said the State Administration of Science, Technology and Industry for National Defense Friday.
China launched its first lunar probe Chang'e-1, named after China's mythical Moon Goddess, on Oct. 24, 2007 in southwestern Sichuan Province. The probe ended its 16-month mission on March 1, 2009, when it hit the lunar surface.
The administration said in a statement that China was making "periodic" progress in processing, analyzing and studying the data from the probe, and the "world class" map of the moon's entire surface.
The map, produced by a stereo camera using a charge-coupled device (CCD) on the probe to form images, was highly accurate, said Ouyang Ziyuan, chief scientist of China Lunar Exploration Project.
Chang'e-1 had produced digital elevation models and a three-dimensional topographical map with the highest possible accuracy and resolution, he said.
The probe had also provided researchers with data on the microwave radiation temperatures of the lunar regolith, the powdery soil layer on the moon's surface, which was significant to identify the thickness of the regolith and the rare gases within it, said Ouyang.
"Unique" data about the high-energy particles in near-lunar space and solar-wind particles had also been obtained, which would enrich knowledge about solar radiation, the magnetic field between the sun and the earth, and the moon, Ouyang said.
The scientists, from some of China's leading research institutions and universities, would consider about 2.76 terabytes (TB) of data generated from the 1.37 TB of information sent back from Chang'e-1, said Ouyang.
Posted by Joel Raupe at 1:11 PM