Water cycle on the Moon remains a mystery 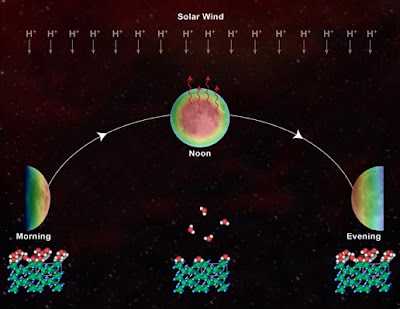 "Water cycle on the Moon" is a phrase that many people – including lunar scientists – were never expecting to hear. This surprising new finding of ubiquitous water on the surface of the Moon, revealed and confirmed by three different spacecraft last year, has been one of the main topics of recent discussion and study by lunar researchers. But figuring out the cycle of how water appears and disappears over the lunar day remains elusive. As of now, scientists suspect a few different processes that could be delivering water and hydroxyl (OH) to the lunar surface: meteorites or comets hitting the Moon, outgassing from the Moon's interior, or the solar wind interacting with the lunar regolith. But so far, none of the details of any of these processes are adding up.

"When we do the model, we assume the way that the water is lost is through photodissociation, and so that sets the timescale," Hurley told Universe Today. "And using that timescale the amount that is coming in through the solar wind or micrometeorites can't add up to the amount observed if it is in steady state, so something is not jiving."

Dana Hurley from The Johns Hopkins University Applied Physics Laboratory is part of team of scientists attempting to model the lunar water cycle, and she discussed the work at the NASA Lunar Science Institute's third annual Lunar Forum at Ames Research Center, July 20-22, 2010.
(Heads up to Lunar Mark)
Read the full article, HERE.