LROC: Aristarchus - Up from the Depths 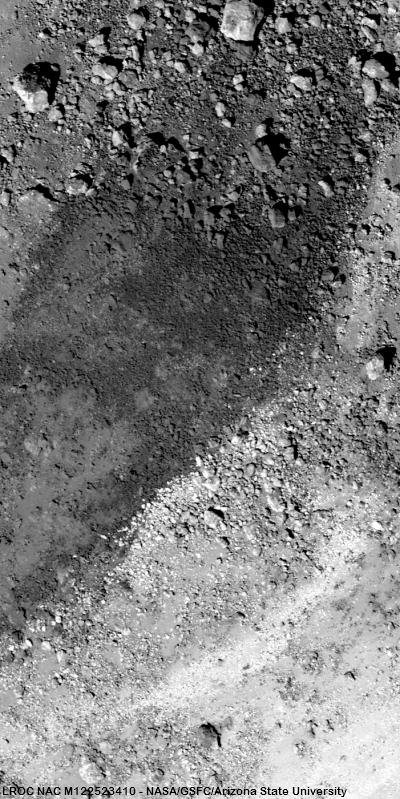 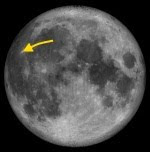 Crater central peaks are formed as the Moon's crust rebounds after the tremendous stress of an impact is released. The energies of impacts are so high that rocks no longer behave as brittle solids, but rather as deformable plastic. It's more accurate to think of the crust behaving like a fluid - as the crater forms, the bottom of the crater is first pressed down, then it rebounds. For craters above 20 km in diameter, the rebound is so strong that material from depth is actually brought up and forms a central peak. In the case of Aristarchus crater, the central peak contains rocks with three very different albedos. As these materials erode out of the central peak they slide downslope, creating contrasting stripes. The highest albedo material reflects about four times as much light as the lowest albedo rocks. 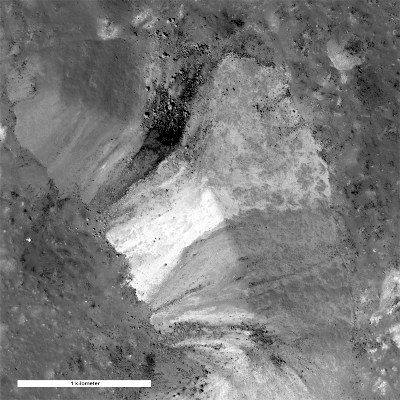 Reduced resolution NAC mosaic of the Aristarchus central peak, opening image is centered in the upper middle of this view [NASA/GSFC/Arizona State University].

What causes these extreme differences in albedo? From other datasets (Earth based telescopes, Clementine, Chandrayaan, Kaguya) it has long been known that the interior of Aristarchus crater is compositionally heterogeneous. The high albedo material is most likely a common lunar rock type, anorthosite. The bulk of the lunar crust is made of anorthosite - it forms the bright material that you see when you look at the Moon (the dark areas are basaltic). On the other hand, perhaps we are seeing a more silicic rock akin to granite? Such silica-rich rocks are known to form on the Moon, we just do not know much about their origin and locations. What is the dark material in exposed in the Aristarchus central peak? Scientists are not sure, however we know the adjacent Aristarchus plateau is blanketed in dark pyroclastic deposits.

"Pyroclastic" derives from the Greek words for fire and broken, as in the small, hot broken rocks erupted in an explosive volcanic event. It is likely that the dark material is related to the nearby pyroclastics - perhaps the impact excavated a now solidified dike that once carried volcanic material to the surface. 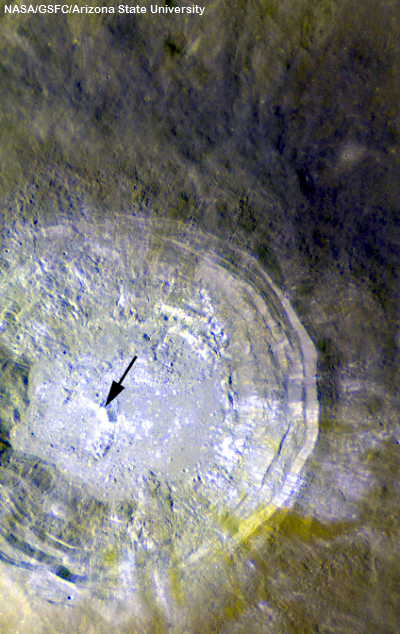 To truly understand the geology of a location scientists typically examine the subsurface as well as the surface. On Earth geologists can drill holes, go into mines, and inspect road cuts. Planetary scientists must rely on impact craters to expose subsurface rocks - nature provides us with natural drill holes! The WAC color image dramatically shows regional differences, most likely due to changes in rock type. These colors are different than what your eye would see. First, the WAC is sensitive to ultraviolet wavelengths (300 to 400 nm) where some minerals (ilmenite for one) are highly absorptive, thus providing a marker of their presence, like a fingerprint. Secondly, images that contain subtle color differences can be stretched to bring out small variations. Mapping of color units that correspond to rock boundaries will guide future planners in terms of identifying the diversity of rock types. How do these broad color differences relate back to the boulders seen lying on the crater floor? Subtle color differences may not be readily apparent to the naked eye. Future explorers would want to carry portable color analyzers (spectrometers) to help sort through the boulders they will encounter on the surface. 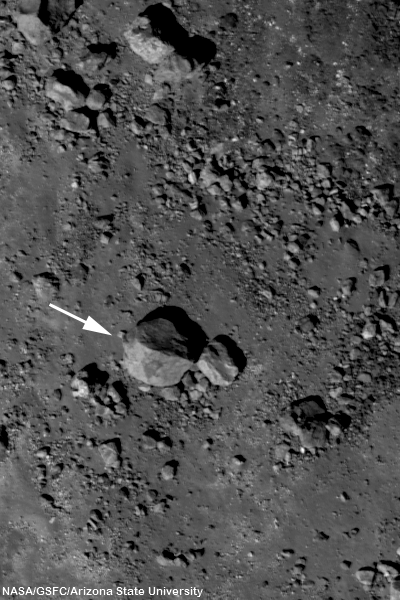 Boulders of all sizes are eroding out of the peak and slowly working their way down slope; the large boulder indicated with the arrow is 35 meters across [NASA/GSFC/Arizona State University].

The clarity and details of the boulder shapes seen in NAC images are astonishing. Can you find any boulders that contain contacts (boundaries) of two rock units? Even without high resolution color, contacts can often be identified. Future astronauts exploring Aristarchus crater could easily sample materials from the highest point of the central peak without actually having to climb to the summit. They will simply browse the samples delivered to the base!

Two Constellation regions of interest are located in the Aristarchus area and were the subject of past featured images: learn more about the diverse geology of the Aristarchus Plateau and the pyroclastic deposits that blanket the region. 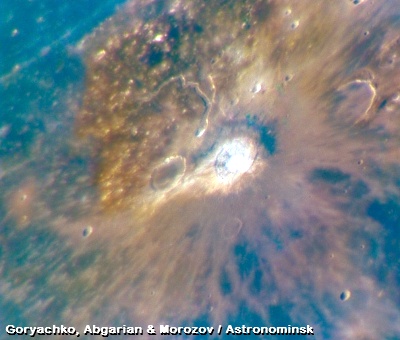 Aristarchus Plateau proves the Moon is not so without color as many believe. Bright Aristarchus crater itself is a fresh and brilliant excavation of the region. It is not hard to see why its immediate vicinty is the site for most reports of "Transient Lunar Phenomena." The Plateau presents a changing face each month as the Moon waxes Full and the terminator gradually sweeps across Oceanus Procellarum, from the eastern heights, lit by sun well before the sunrise nearby to the complete, blinding and colorful full illumination [Goryachko, Abgarian & Morozov / Astronominsk].

Additional Reading:
The Great Wall of Aristarchus
September 30, 2010
Posted by Joel Raupe at 10:36 AM