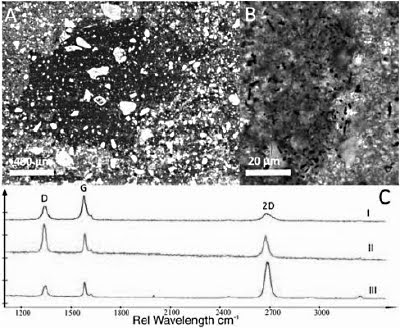 A. Light microscopy image of 72255,89. (B) Higher magnification image of transition from light to dark material in area shown in (A). (C) Raman spectra of three types of graphite analyzed in the sample [A. Steele, et al].

Long-held secrets continue to be unlocked from the Moon. Researchers taking a new look at a rock brought back by the Apollo 17 mission have discovered graphite in the form of tiny whiskers within the lunar sample. Just like the recent finding of water on the Moon, it was previously thought that any carbon present in the Apollo rocks came from terrestrial contamination from the way the lunar samples were collected, processed or stored. Andrew Steele, who led a team from the Carnegie Institution's Geophysical Laboratory said the graphite could have come from carbonaceous impactors that struck both the Moon and Earth during the Late Heavy Bombardment, approximately 4.1 to 3.8 billion years ago, and if so, could provide a new and important source of information about this period in the solar system's early history.

"We were really surprised at the discovery of graphite and graphite whiskers," Steele said. "We were not expecting to see anything like this."

The tiny graphite whiskers or needles were found in multiple spots within a specific area of lunar sample 722255 from the Mare Serenitatis impact crater in the Taurus-Littrow region, indicating that the minerals are in fact from the Moon and not just contamination.

Read the article, HERE.
Posted by Joel Raupe at 4:25 PM