Is the Moon really 'Been there, done that?' 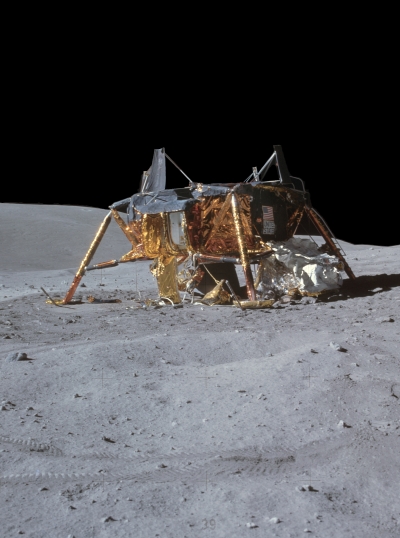 Like Viking settlements in Maritime Canada abandoned centuries before Columbus, forty years after the Apollo era six lunar module descent stages stand lonely near the foot prints where twelve Americans became the first to scratch the lunar surface. Now as then, there are those who question the value of exploring the Moon. The unquestioned scientific value of those earlier excursions was eclipsed by their geopolitical triumph. But, in the early years of the 21st century we have discovered better reasons for returning to the Moon than during the century prior to Apollo. The Moon appears to be an essential key to Deep Space, to our understanding the history of the Solar System, and no understanding of Earth can hope to be complete before a proper exploration of Earth's Moon.
Nancy Atkinson
Universe Today

If there's only one thing we've learned from all the highly successful recent Moon missions – the Lunar Reconnaissance Orbiter, LCROSS, Chandrayaan-1 and Kaguya — it's that the Moon is perplexingly different from our perceptions of the past 40 years. The discovery of water and volatiles across the surface and in the permanently shadowed regions at the poles changes so many of the notions we've had about Earth's constant companion. Basically, just within the past year we've realized the Moon is not a dry, barren, boring place, but a wetter, richer and more interesting destination than we ever imagined. And so, the proposal for NASA to effectively turn away from any human missions to the Moon, as well as Administrator Charlie Bolden's 'been there, done that' comments is quite perplexing – especially for the lunar scientists who have been making these discoveries.

"It's been quite a year for the Moon," said Clive Neal, a lunar geologist from Notre Dame, speaking last week at the NASA Lunar Science Institute's annual Lunar Forum at Ames Research Center. "And things got quite depressing around February 2010."

That's when President Obama proposed a new budget that effectively would end the Constellation program and a return to the Moon.

At the Forum, lunar scientists shared their most recent findings – as well as their attempts to model and comprehend all the data that is not yet understood. But they saved any discussion of NASA's future until the final presentation of the meeting.

"Hopefully this talk will stop you from running out of here ready to hang yourself or slit your wrists," quipped Neal, who led the final session.

The week began, however, with keynote speaker Andrew Chaikin – author of the Apollo 'bible,' "A Man on the Moon," and several other space-related books — saying, "We have to erase that horrendous 'been there done that' notion." Chaikin also shared a famous Peanuts cartoon showing Lucy pulling the football out from under from Charlie Brown. No caption was needed for everyone to understand to what Chaikin was referring.

"With all of these new discoveries, we should have ample reason to believe that humans will follow," said Chaikin. But right now, he added, the man in the Moon looks a little like Rodney Dangerfield. "The Moon wants – and deserves – respect."

As i am searching for some information i landed in your blog and i am eagerly wish to add your link in blog so that my visitor can get some useful information from your blog.

Hence i added your blog link in my list (Blogs i like to read). If you could provide me a link to my blog (http://2daynewsupdates.blogspot.com/), i feel more happy and it would be more useful to me.

Please do consider my request to add my link there.