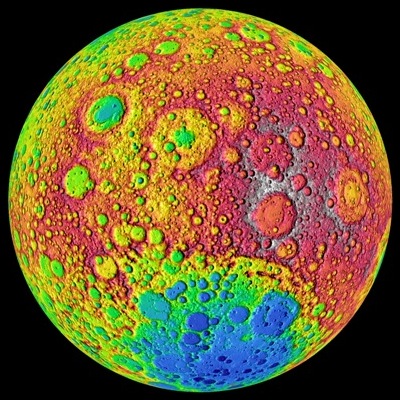 The Four billion year old South Pole-Aitken (SPA) basin, the oldest and largest yet identified on the Moon, was readily visible just as soon as the Soviets obtained humanity's first, hazy telephoto view of the Far Side, barely more than fifty years ago. Above its tortured interior, stretching from near the equator, overlapping the South Pole, to the Near Side is equally unmistakable in a preliminary rendition of LRO (LOLA) laser altimetry. (Reproduced from "Ten Cool Things Seen in the First Year of LRO," NASA, June 23, 2010) [NASA/GSFC/Arizona State University]. 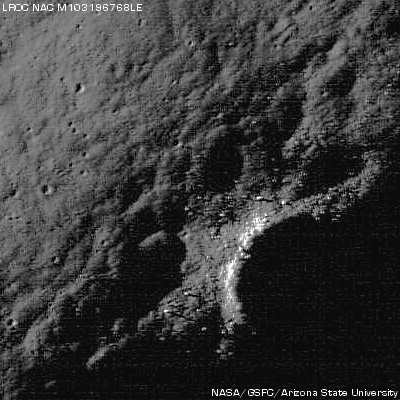 A narrow view through the LRO Narrow Angle Camera (LROC NAC) northeast of Ballingauzen, showing the largely unexplored surface of one of the vast number of basalt plains encircled by SPA's outer wall of mountains. "A crater within a crater within a basin, the interior of the South Pole-Aitken basin is one of the most compelling destinations on the Moon. (LROC NAC image M103196768LE, LRO orbit 377, alt. 46.69km, July 27, 2009; Resolution 0.51cm - field of view is 520 meters [NASA/GSFC/Arizona State University].
Brett Denevi
LROC News System

South Pole-Aitken (SPA) basin is the largest and oldest recognized impact basin on the Moon. It's diameter is roughly 2,500 km or 1,550 miles. The Moon's circumference is just under 11,000 km, meaning the basin stretches across nearly a quarter of the Moon. In the LROC WAC mosaic below, which is centered on the middle of the basin, you can see SPA as an area of relatively low reflectance extending from the crater Aitken in the north and all the way down to the South Pole. Topographic data from LOLA can also help to give a sense of the enormous effect the SPA impact had on the Moon - the basin is more than 8 km (5 miles) deep. 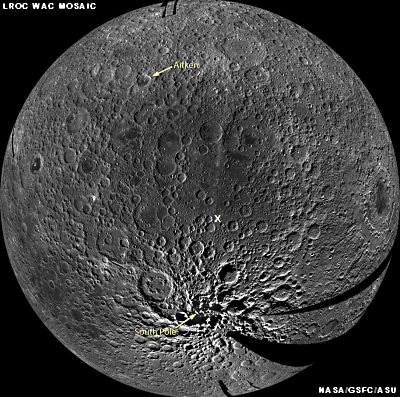 A preliminary monochrome mosaic of the Moon from the LROC Wide Angle Camera (WAC), centered in the middle of the South Pole-Aitken basin. Arrow points to the South Pole and an X marks the Constellation region of interest within the basin and the location of the NAC detail above [NASA/GSFC/Arizona State University].
Stratigraphic relationships show that SPA is the oldest impact basin on the Moon, but scientists are intensely interested in just how old it is. Lunar samples suggest that most of the major basins on the Moon formed around 3.9 billion years ago in a period called the late heavy bombardment. By this time most of the large debris within the solar system should have already accreted to form the planets, so such a large number of big impacts occurring at nearly the same time may have been due to unusual gravitational dynamics in the early Solar System. Was the impact that caused the SPA basin also a part of some cataclysmic event that occurred 3.9 billion years ago? If so, that impact is strong evidence for an extreme event that would have affected all of the terrestrial planets, including Earth at a time when life was just beginning. If the basin is much older, that may suggest that instead of a spike in the impact rate at 3.9 billion years, the number of impacts simply trailed off from a peak earlier on.

How can we find out just how old the SPA impact basin is?

The best way would be to sample materials from the interior of the basin and use radiometric age-dating techniques to determine when they were last molten, as heat from the impact would have melted a large volume of material, resetting radiometric clocks. But the basin is so old that its surface has been cratered many times over, meaning that some of the rocks would have had their radiometric ages reset by these subsequent impacts. So it may be difficult to find rocks with ages that truly reflect the SPA event without careful consideration of the local geology. The Constellation region of interest, highlighted in the NAC detail above and outlined in the WAC mosaic below, was selected because it is in a deep portion of the basin, where a large volume of melt would be expected. Some of this melt would remain as a significant component of the soil, and an analysis of a carefully selected suite of samples from this region would reveal the age of the oldest lunar impact basin. 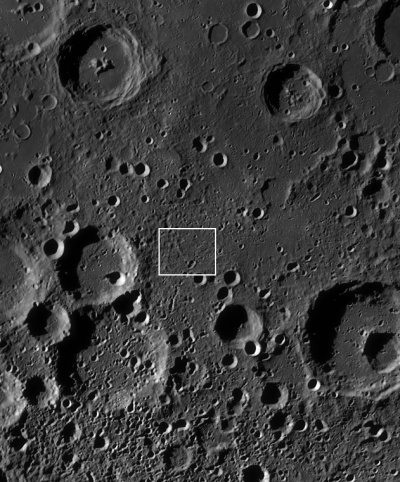 WAC monochrome mosaic of the interior of SPA, zoomed in to show the 40x40 km Constellation region of interest (white box) and surroundings [NASA/GSFC/Arizona State University].
One final note - imagine the view of the Moon from the Earth when the SPA impact occurred. What would it have looked like? How much ejecta would have landed on the Earth? How long would it take for ejecta to reach the Earth? Surely this impact profoundly affected the young Earth.

Where would the best sample site be? Browse the full-resolution NAC image and WAC mosaic and decide for yourself!
Posted by Joel Raupe at 8:10 PM