After nearly five years of LRO WAC observations, there are over 50 repeat multispectral observations for each ~480 by 480 m2 area on the Moon. The opening image is a new WAC RGB color composite mosaic using ~21 months of observations acquired during the 50 km quasi-circular orbit period.

One of the most arduous tasks for any planetary remote sensing imaging experiment is photometric correction. What exactly is a photometric correction (or normalization)? When mosaicking together images acquired at different times, image boundaries are often quite obvious because the Sun was in a different position and the camera pointing angles may also have varied. Thus the apparent brightness of the surface can be very different where images overlap.

As the lighting and viewing angles change, the reflectance seen at the camera changes in a non-linear manner (below, left). Photometric normalization adjusts the relative brightness of each pixel in such a way that the apparent camera (emission) angle and the Sun angle are the same in every pixel (e.g. incidence angle (i) = 60°, emission angle (e) = 0°, and phase angle (g) = 60°, see angle geometries below, bottom).

For making seamless mosaics or comparing the reflectance at two remote locations, photometric normalization is imperative. Sounds simple, right? In theory the normalization should be simple. However the apparent brightness of the surface as the incidence angle changes is also dependent on grain size, state of maturity, and composition. Many studies have tried to replicate this non-linear reflectance variation for the nearside or for a sample area of the Moon. Typically these corrections work well for that particular area, but not for other portions of the Moon.

To make a global mosaic from the WAC data a new function was needed that accounted for all the variables mentioned above. But how can one account for changes in composition, for example mare vs. highlands? Since we have many complete image sets for the whole Moon, we could divide the Moon into 1° latitude by 1° longitude photometric tiles (64800 tiles). The wide field of view (60° in color mode) of the WAC results in more than 50% overlap with neighboring orbits, providing at least two (and often many more) different observations per 100-meter pixel for each spot on the Moon every month. Using LROC team member Bruce Hapke's photometric model [Hapke, 2012] (a widely applied theoretical model for planetary remote sensing), we parameterized the multispectral and multitemporal reflectance data from each tile (~30x30 km2 area; about 500,000 data points in average), resulting in the near-global Hapke parameter maps of the Moon (see next figure).

The opening WAC color mosaic was photometrically normalized using the Hapke correction and our derived parameter sets (shown in the maps above), achieving a beautiful seamless mosaic. The mosaic shows how well the correction works! Even better, the parameter maps tell us about the nature of the lunar surface. Each of the Hapke parameters has a physical meaning that relates to the material properties of the surface, for example the optical thickness and shape irregularity (b, c), grain size distribution (hS), and of course the albedo (w). This is the first ever resolved Hapke parameter map for any body in our Solar System - a major scientific accomplishment. 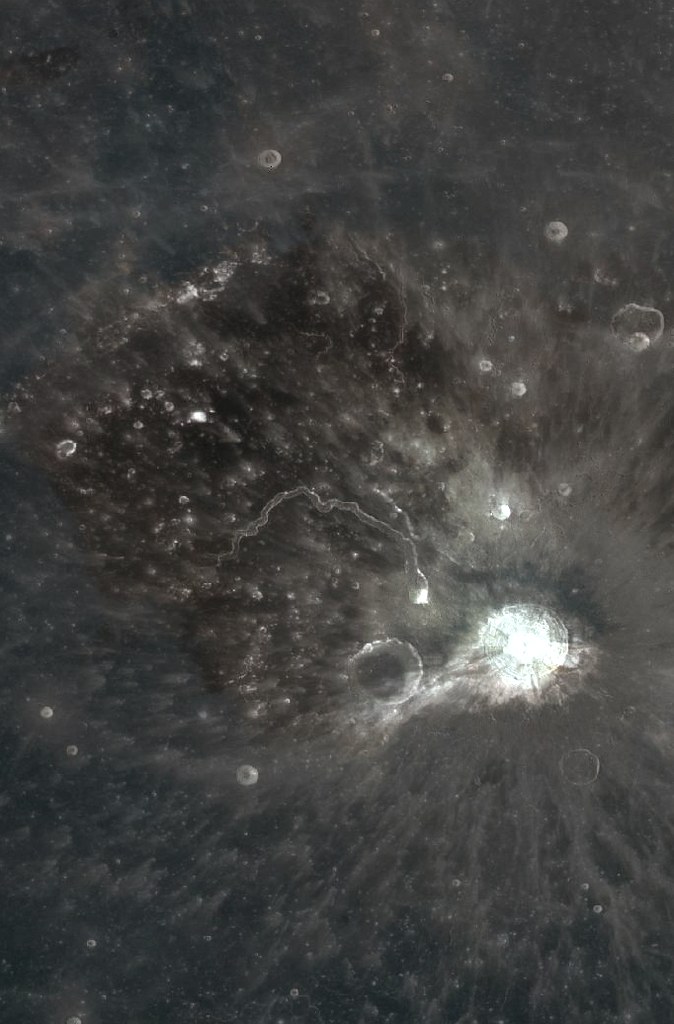 Note that small "holes" in the mosaic are due to shadows or saturation in the original observations.
Posted by Joel Raupe at 8:47 PM No comments:

Below is a posting for post-doc position at LLNL

The Chemical Sciences Division (CSD) in the Physical and Life Sciences (PLS) Directorate is seeking a planetary sciences postdoctoral researcher. This position requires US citizenship.

The successful candidate will contribute to several research projects funded by NASA, as well to projects funded by the Department of Energy.  NASA related projects will address the origin and evolution of primordial Solar System condensates, primitive meteorites, lunar samples, and martian meteorites.

The candidate is expected to have experience with  chemical separation by ion chromatography in a class 100 clean room environment, as with as with isotopic analyses by either multi-collector inductively coupled or thermal ionization mass spectrometry.  This individual will report to the Group Leader for Chemical and Isotopic Signatures.

Watching craters "as they happen" 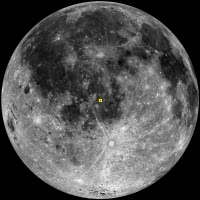 On 11 September 2013 the "Moon Impacts Detection and Analysis System" (MIDAS) camera captured a bright 8-second long flash on the central nearside of the Moon.

This was the brightest event captured so far by the MIDAS team, and they estimated that the crater should be between 46 and 56 meters in diameter.

Video sequence recording impact on the Moon's nearside in Mare Nubium. The magnitude of the explosion is estimated to have been roughly equal to that of Polaris, the North Star, and the recorded light curve following after lasted a remarkable eight seconds. Madiedo, et al. (2014) [IAA-CSIC/Universidad de Huelva].

Fortunately there was a NAC image of the target area acquired before the impact, so finding the new crater was relatively easy once an "after" image with comparable lighting to the "before" image was acquired.

As it turns out the new crater is ~34 meters (112 feet) in diameter and is located at 17.167°S, 339.599°E, only 2 kilometers (1.2 miles) from the original telescope-based prediction. In the before-after animation you can see ejecta effects from the crater extend out more than 500 meters in all directions!


Impact flash recorded on the unlit Nearside by Prof. Jose M. Madiedo, 11 Sept. 2013. North is to the right (note the visibility of Grimaldi, top center - the 173 km-wide walled plain is often the last recognizable feature on portion of the Nearside lit by Earthshine as the Moon waxes Full). The Moon was shy of First Quarter. This video was produced on the occasion of the publication (in Feb. 2014) in Monthly Notices of the Royal Astronomical Society (MNRAS) of the paper entitled "A large lunar impact blast on 2013 September 11," by J.M. Madiedo, J.L. Ortiz, N. Morales and J. Cabrera-Caño.

A longer, more instructive version was uploaded by the authors HERE.

Secondary scatter over Haret C and the SPA interior 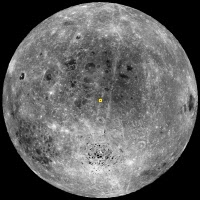 Secondary craters form when an impactor hits the surface (forming the primary crater) and throws out blocks of material that proceed to form their own craters (secondaries) as they hit the surface.

Thankfully, in the case of Haret C, the secondary craters stand out from primary craters due to their proximity to each other. Random impacts typically do not form clusters like those draped over Haret C (28.47 km; 57.6°S, 186.3°E) .

Within high resolution images, smaller craters are used for crater counting. However, secondary craters become more common at smaller diameters introducing a problem for crater counters if the secondaries cannot be distinguished from primary craters. Secondaries counted as primaries result in higher crater counts per unit area, which in turn result in age estimates that are older than the true age of the surface.

A key science goal is coming to a better understanding of the morphology or abundance of secondaries relative to primary craters so that more accurate age estimates can be made for smaller, younger terrains: especially important for panning at the scale of the NAC images for future missions to the Moon.

Explore the full-width NAC mosaic HERE. Do you see any primary craters in the mix? 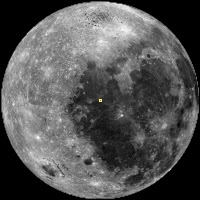 The lack of atmosphere on the Moon can have its benefits. For example, without an atmosphere, there are few processes to degrade landforms.

On Earth, rain and wind are major causes of erosion, but on the Moon, those causes are absent. Erosion on the Moon is due to impacts that cause shaking and can demolish other craters during formation and to gravity pulling material downslope.

In the case of Lichtenberg B, gravity has not yet rendered the crater smooth and subdued, and there are few impacts nearby, much less any that could have affected the morphology of the crater, as Lichtenberg B appears younger than its neighbors.

On the downside, the lack of atmosphere means that space weathering is more efficient on the Moon, and fresh, highly reflective crater ejecta darkens over time. Because Lichtenberg B's ejecta deposit is still bright, it is quite young.

Crisp morphology and a highly reflective ejecta deposit make Lichtenberg B stand out from many of the nearby impact craters. This exquisitely preserved crater is located to the northwest of Aristarchus Plateau in Oceanus Procellarum, a vast mare unit littered with impact craters and wrinkle ridges. The ejecta deposit is particularly interesting because it displays a wrinkled texture with structures that resemble dunes.

How do these structures form? What makes Lichtenberg B's ejecta deposit different from other craters that lack these dune-like structures? It turns out that Lichtenberg B is not alone. Scientists have observed these same features at Linné Crater and are in the process of determining how they formed.

Related Posts:
Lichtenberg B Flow
On the edge of Lichtenberg
Lichtenberg Crater
Posted by Joel Raupe at 4:13 AM No comments: