As New as a New Moon can get 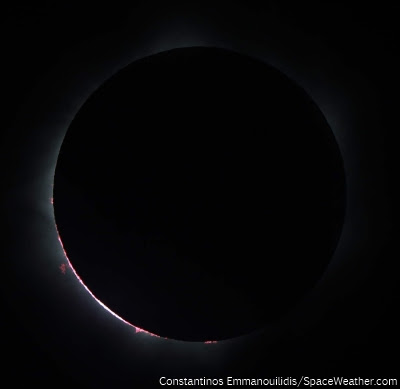 Astronomers and astro-tourists traveled to Chile, French Polynesia and the southeastern Pacific Ocean to experience the solemn magnificence of a Total Eclipse of the Sun, July 11.

SpaceWeather.com and other sites can be counted on to post images as they circulate in coming days, like the above by Constantinos Emmanouilidis, imaged through intermittent cloud cover over the Cook Islands, Sunday.

Preliminary stills at Totality, often through thin cloud cover, reveal a respectable Earthshine bringing Near Side features into view along with perhaps distinctive blue added one might suppose from two-thirds of the Pacific illuminating Grimaldi, Imbrium, Procellarum and Crisium, etc.

Issac Asimov once noted that this occasional intersection, with predictable regularity, of the very outermost of last 100 kilometers or so of the cone of our Moon's central umbra with Earth's outermost surface seemed to him so improbable as to be impossible. Considering the real distances versus the apparent distances to the Moon, the relative sizes and angular momentum of the Three Bodies in play, his point is well taken; adding to rather than detracting from the awesome beauty of this phenomena.
Posted by Joel Raupe at 3:58 AM