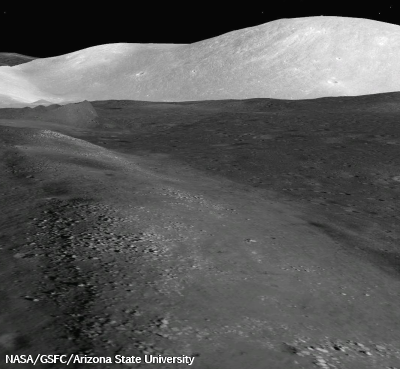 A better view of the Constellation Region of Interest at Mare Crisium (10.8°N, 58.6°E), improved by the additional release to the Planetary Data System (PDS) of Lunar Reconnaissance Orbiter Camera (LROC) imagery through March 15, 2010. Stretching toward the southeast the prominent Dorsum Termier wrinkle ridge steadily (and very, very slowly) sheds boulders originally pushed up by the migration of unevenly cooled sheets of volcanic melt. The LROC spotlight was on the field of view at center foreground when a portion of LROC NAC M119469420LE was the LROC Featured Image, March 11, 2010. The Right-hand frame from that same session (M119469420RE), swept up January 30, 2010 (LRO orbit 2740), doubles that field along the original image east boundary. The texture of mountains in the distance, the inner ring along the southern edge of Crisium basin, is made possible with the addition of LROC Narrow-Angle Camera and Wide-Angle Camera images gathered under varying degrees of illumination. Full size view (1920 x 1110), HERE [NASA/GSFC/Arizona State University].
Mark Robinson
Principal Investigator
Lunar Reconnaissance Orbiter Camera
LROC News System

For this release the NAC-R was mirrored (left-to-right) to match the orientation of the NAC-L (newly released data as well as all of the NAC-Rs of the prior release). This change was implemented for user convenience. Additionally the index file was modified for each product (EDR and CDR) adding new fields to aid in understanding NAC image orientation. A full description of the NAC-R to NAC-L orientation has been added to appendix (C) of the LROC SIS.