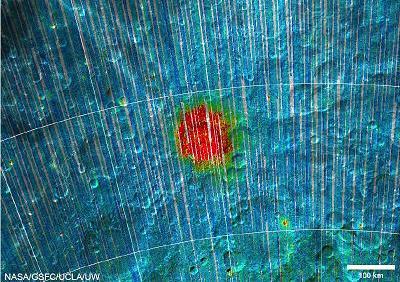 Thermal data gathered during repeated orbital passes using LRO's Diviner shows the range of materials of similar composition in and around 109 million year-old Tycho, putting the familiar crater in a new light, including the distinctive twin ray trails [NASA/GSFC/UCLA/UW].
Eric Hand
Nature: The Great Beyond

Scientists are using temperature measurements to map the rockiest parts of the Moon – and the results could help NASA choose better landing sites for missions.

Infrared radiation readings taken by the Diviner Lunar Radiometer Experiment, an instrument on NASA’s Lunar Reconnaissance Orbiter (LRO) mission, have enabled researchers to see the moon’s temperature variations in detail. Not surprisingly, the surface heats up during the day and cools down at night. But rocks tend to retain their heat longer than the regolith, or lunar soil, and so they stay warm throughout the night.

Mapping these hot spots has provided a quick and quantitative way to assess rock abundance over vast areas of the Moon, says planetary scientist Josh Bandfield of the University of Washington in Seattle, who presented his results on Thursday at the Third Annual NASA Lunar Science Forum, held at NASA Ames Research Center at Moffett Field, California.

Because rocks get worn away over time, older craters tend to be less rocky. But a young crater like Tycho “just lights up” on the rock abundance map, says Bandfield (see image).

The Diviner team has also mapped spots that are cold enough to retain water ice. Around the Moon’s south pole, the surfaces of crater floors fulfill this criteria – but there are even larger surrounding areas where water ice would be stable below the surface, said planetary scientist David Paige of the University of California, Los Angeles at the forum. These regions might warm up during the hottest part of the year, but the subsurface would stay cool enough to preserve water ice for billions of years, he said.
Posted by Joel Raupe at 1:07 AM