NOTE: The Pioneers can perhaps be forgiven if we go a bit overboard with the following highlighting of the latest Featured Image from the LROC team at Arizona State University; the Apollo 16 landing site in high Sun. We took the advantage of the Planetary Data System and highlighted LROC NAC observation M109134835LE already in "Foot fall around Orion in the mid-day glare," March 19, 2010 - JCR. 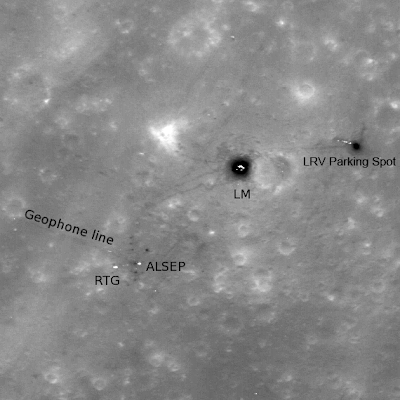 The lunar module Orion landed in the Descartes highlands of the Moon on 21 April 1972. The Apollo 16 mission targeted a highland region. Originally thought to be a volcanic site, the samples returned by Apollo 16 actually indicated that the highlands of the Moon primarily consist of impact-formed rocks (breccias), a substantial scientific result.

Today's featured image is an LROC NAC image of the Apollo 16 landing site, acquired when the Sun was nearly overhead, in contrast to our previous image of the site. High Sun causes white and metallic artifacts left on the surface by Young and Duke stand out in high contrast as they reflect the noon-day sun back at LROC. The Apollo 16 astronauts churned up the lunar soil (regolith) as they moved about exploring the Moon, and this disturbed material shows up as dark lines and patches. Since the astronauts spent a fair amount of time around the Lunar Module during their three extra-vehicular activities, the bright lunar module appears to have a dark halo. The same dark halo appears around the parked rover. The labels on the image are for the Lunar Module (LM), the Lunar Roving Vehicle (LRV), the Apollo Lunar Surface Experiments Package (ALSEP), the Radioisotopic Thermoelectric Generator (RTG) that powered the ALSEP, and a line of geophones that extended W by NW from the ALSEP station. 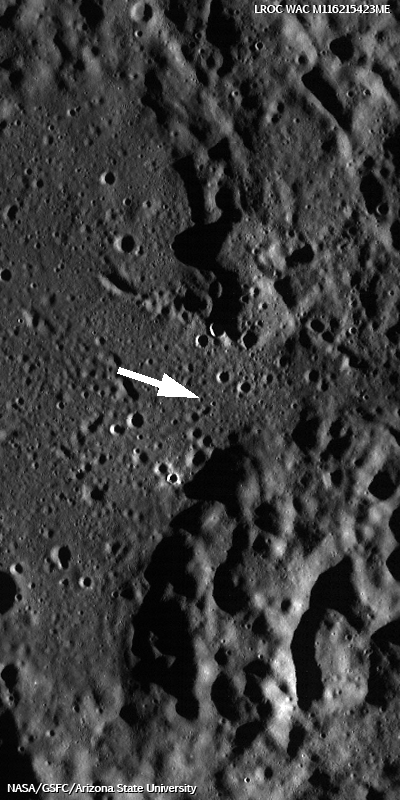 The Constellation program identified this location as a region of interest because many important scientific questions will be answered by returning here. For example, like other Apollo landing sites, the artifacts left at the Apollo 16 site provide a record of space weathering at the site since 1972. Various planned (and accidental) long duration exposure experiments (like NASA's Long Duration Exposure Facility, experiments on Mir, etc.) have been studied, but all of these have been from facilities in low Earth orbit. Studying what decades of exposure to the lunar environment does to hardware will provide key inputs to engineers designing future systems to operate for long periods in extra-terrestrial environments (Moon, asteroids, Mars). 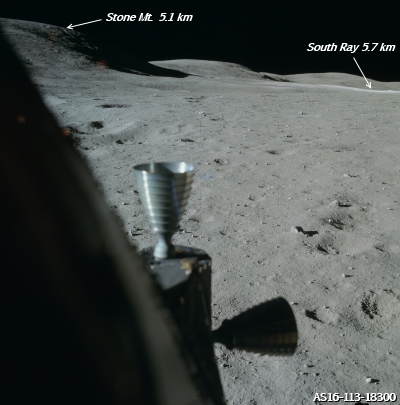 Apollo 16 lunar module pilot Charles Duke took this photograph out of Cmdr. John Young's window as part of a panorama of their landing site, April 21, 1972. The geological importance of South Ray crater has grown in the years since investigator's initial disappointment at not immediately seeing the evidence of volcanism that had brought them to the location. The crew detected the strongest magnetic fields of any in the Apollo program. Stone Mountain, whose lower elevations Young & Duke would explore during their second EVA, is the northwestern edge of the Descartes formation. In low orbit 27 years later, Lunar Prospector would co-relate the strongest magnetic anomaly on the Moon's near side with the bright, apparently low optical maturity of a swirl, centered on the northern rim of Descartes crater, only 65 km away [NASA/ASJ/AS16-113-18300]. 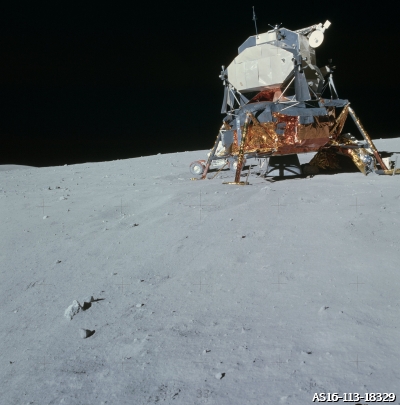 Cmdr. John Young set down Apollo 16 lunar module Orion onto the western rim of a very worn and therefore nearly invisible crater. What had not been immediately apparent until after he disembarked and surveyed their position soon after beginning their first EVA turned out to be a very distinctive identifier when LRO investigators located the Orion descent stage in narrow angle camera images 38 years later [NASA/ASJ/AS16-113-18329]. 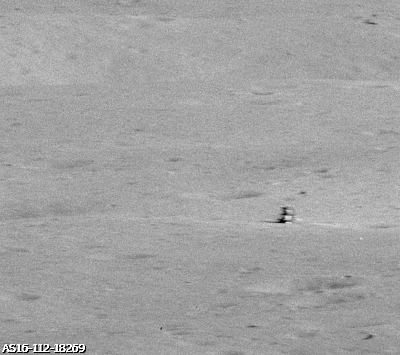 Charles Duke swept up their "little home" on the Moon, with Palmetto crater and North Ray (not seen in this crop) in the background in one of their spectacular panoramas from Station 4, high on the face of Stone Mountain, during EVA 2 [NASA/ASJ/AS16-112-18269]. 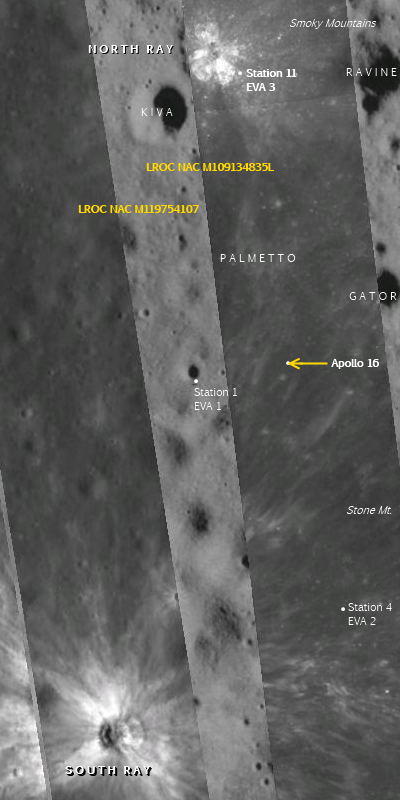 To illustrate the stark differences in appearance of lunar locales from overhead, in high and low illumination, two LROC narrow-angle camera observations (M119754107, phase angle = 34.77° - LRO orbit 2781, February 2, 2010 and the Featured M109134835L, phase angle = 7.76° LRO orbit 1217, October 2, 1009) are seen here superimposed on a baseline Apollo metric model, along with selected Apollo 16 station sites. North and South Ray craters take on their bright features familiar to telescopic observers on Earth. The long streamers of South Ray even pass completely over the Apollo 16 landing site. Without the depth of field made possible in long shadows of a low sun, landmarks like Palmetto and Gator craters, and even Stone Mountain, seem to disappeared completely [NASA/GSFC/Arizona State University]. 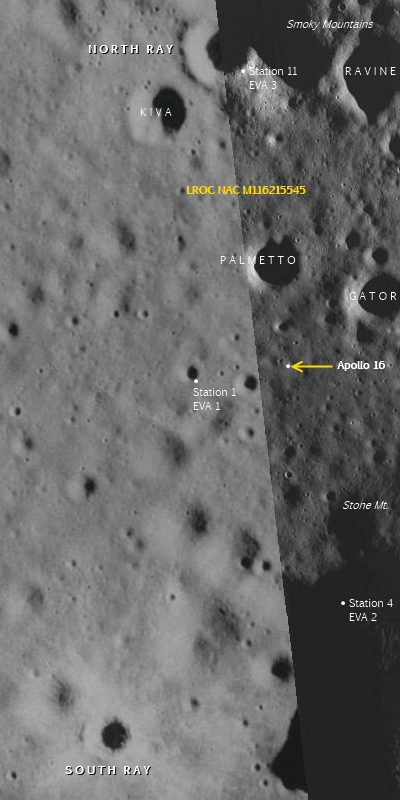 For comparison, in the long shadows of an early morning LROC NAC observation M116215545 (phase angle = 93.22° - LRO orbit 2260, December 23, 2009) caught up the still-intriguing Descartes landing site landmarks while those bright features of North and South Ray (and "Baby Ray") take their turn at being nearly impossible to see [NASA/GSFC/Arizona State University].

For more information on LROC's observation campaign for the Constellation program regions of interest read this Lunar and Planetary Science Conference abstract, and visit the LRO Science Targeting Meeting website (look for the baseball card summary sheets for each site: part 1, part 2).
Posted by Joel Raupe at 5:17 AM