Since the Moon has no atmosphere, no wind, and no rain, features on the surface are preserved for millions of years. The exact age of Linné crater is not known, although it is thought to be less than ten million years old. The new LROC images show a richness of detail that confirm this young age.

The small black arrows on the rim point out small delicate fractures (lower left of opening image) formed as the crater walls slumped inward. Also note the frozen impact melt flows amongst the boulders strewn along the steep inner wall (large white arrow, close up below). 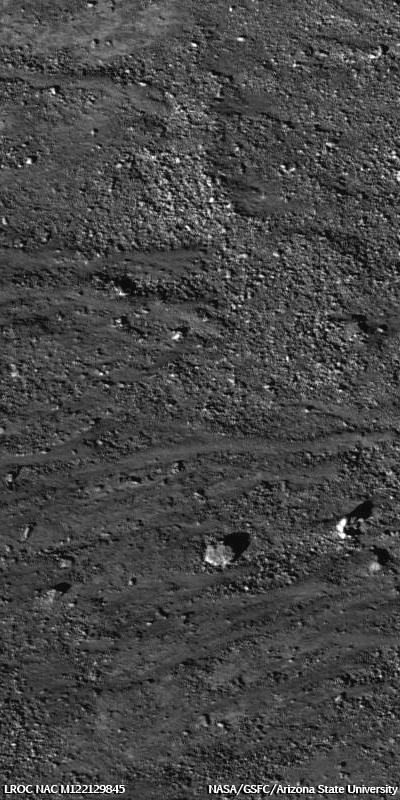 Full resolution close-up of LROC Narrow-Angle Camera observation M122129845, showing melt debris flows and earlier layering preserved from the impact event that formed Linné, excavating its location in west Mare Serenitatis. (Resolution = 48.4 cm per pixel, from 41.86 km in LRO orbit 3132, March 2, 2010) [NASA/GSFC/Arizona State University].
The new views provided by LROC show us that each crater has its own story to tell - no two are the same. Linné crater formed in a thick deposit of mare basalt. Typically young craters in mare have large numbers of boulders strewn around their outside flanks. 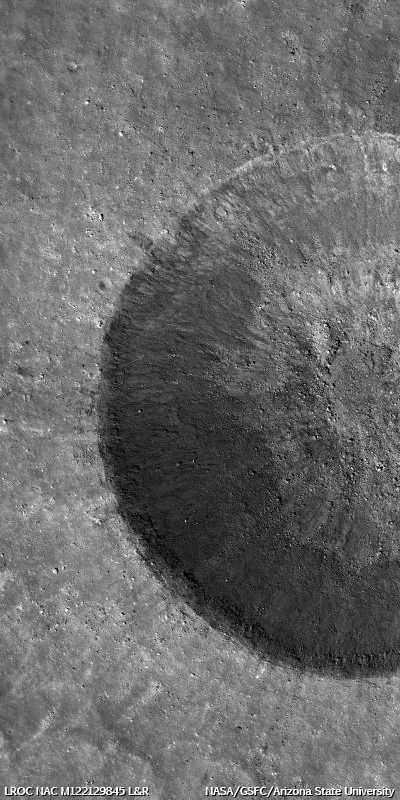 At roughly one meter per pixel resolution, the LROC Mosaic of both the left and right Narrow Angle Camera frames of observation M122129845, detail of boulders and other noted features distinct to Linné are still visible. Linné was named for Swedish doctor and naturalist Carl von Linné (1707-1778), founder of the Academy of Stockholm and, according the authors of the Virtual Moon Atlas, "inventor of a nomenclature of vegetable and animal species." They further recommend it as a "very interesting formation" for amateur observers while noting Linné "was the object of controversies during 19th century" because, some insisted, its form routinely changed, most likely the mistaken interpretation of altered appearances due to changes in angles of incidental solar illumination [NASA/GSFC/Arizona State University]. 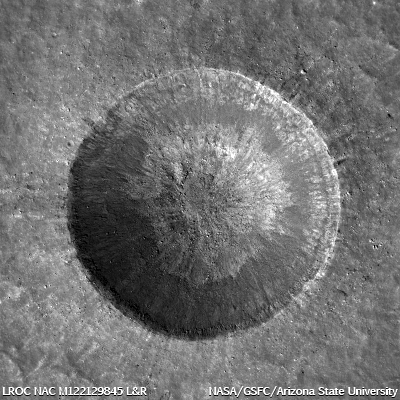 Reduced resolution (~2 meter pixel scale) mosaic of Linné; context for the location of the higher resolution images above. Linné (27.7°N, 11.8°E) is a landmark for amateur observers equipped with 200mm reflecting telescopes. As with most such observations, Linné is most easily spotted when highlighted in stark relief by lengthened shadows near local sunrise or sunset, five days after a Full Moon or six after New Moon, respectively. (Charles A. Wood, steadfast curator of the indispensable Lunar Picture of the Day (LPOD) website, has at least four excellent Earth-side images of Linné, contributed by their talented creators, in the extensive LPOD Photo Gallery [NASA/GSFC/Arizona State University].
As you explore the full resolution NAC mosaic look for boulders outside the crater -- they are few and far between. Perhaps the local basalts were deposited as very thin layers, so there are no thick solid materials from which to produce boulders? We can see layering in the crater walls, so this hypothesis is certainly plausible. Examine the ejecta field: what causes the dune-like structures? Did the impact ejecta travel low across the surface? Did pre-existing obstacles somehow aid in "dune" formation? At a future opportunity the LROC team plans on acquiring a stereo observation of this fascinating crater to allow detailed topographic analysis of these landforms so scientists can get to the root of these questions.
Perhaps future explorers will use the LROC images and topographic maps to plot out geologic traverses! Examine Linné crater and plan out what you think would be the best spots to visit. Could an astronaut safely travel down into the crater? If so, what would you look for on the walls and on the floor?
Posted by Joel Raupe at 3:18 AM