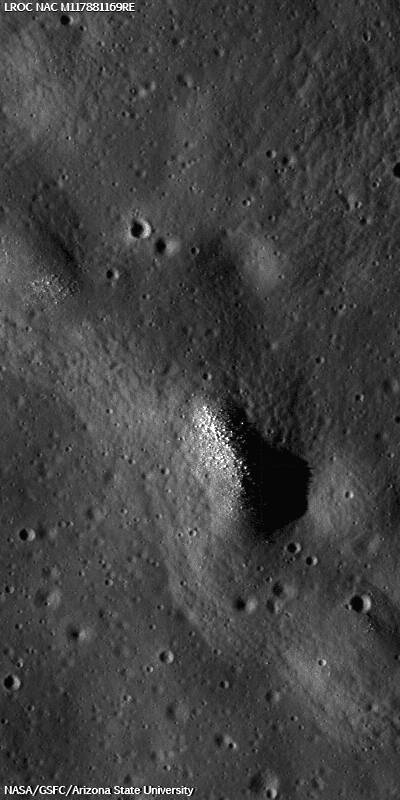 Exposed boulders are clustered on the crest of a sharply defined wrinkle ridge, much like sprinkles on an ice cream cone. Image width is 272 meters, and illumination is from the lower left in LROC NAC M117881169R (See the full-sized Featured Image, HERE.) [NASA/GSFC/Arizona State University]
Lillian Ostrach
LROC News System 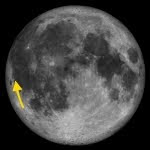 The sinuous wrinkle ridge above is a small part of a larger wrinkle ridge, which in turn is part of a larger wrinkle ridge network located in southwestern Oceanus Procellarum. Wrinkle ridges are tectonic features resulting from compressive stresses and are of particular interest to scientists. The wrinkle ridge featured today has a well-defined broad rise (or ridge) and with numerous superposed wrinkles. In addition, boulders litter the crest of the ridge in some places, and most likely they eroded out of the fractured and faulted basalt forming the wrinkle ridge. However, when looking at the full LROC NAC image, there are only a few places along the wrinkle ridge where boulders are observed. No one really seems to know why boulders are present on some ridges but not others - a question lunar scientists are attempting to answer using LROC NAC data! 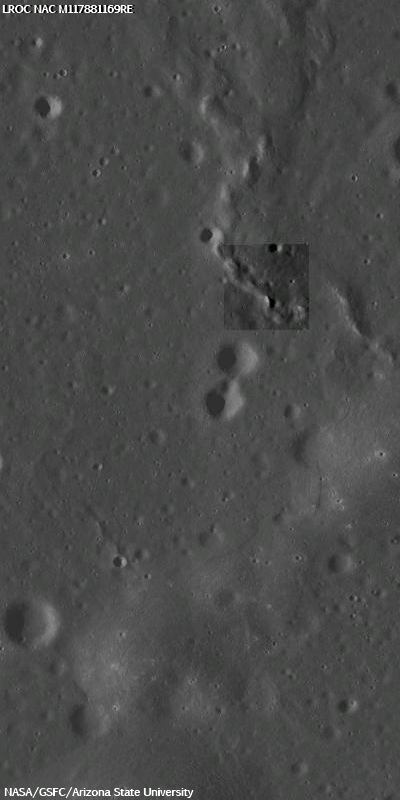 Backing up from the floor of Procellarum's Deep South, the complexities of the wrinkle ridge system here comes into view, part of an ancient preserve of transitory viscosities, long past. Evidence appears to show more than one event, more than a single interaction of materials, inside and out of the inundated, oblong Damoiseau L crater, immediately to the south [NASA/GSFC/Arizona State University]. 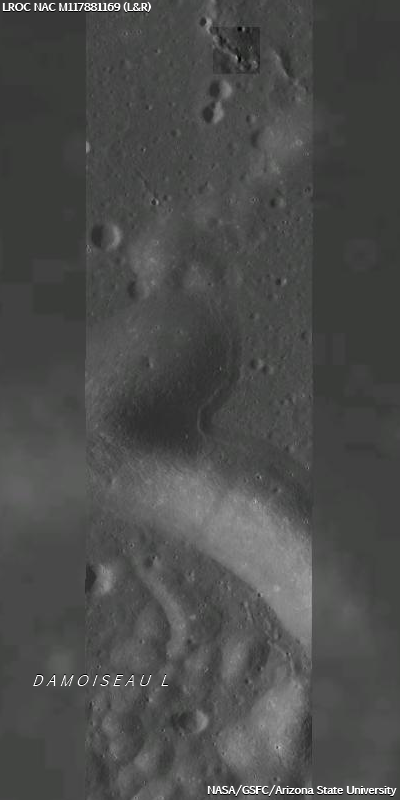 Still higher, up to an "LRO's-eye-view" at 43.67 kilometers and the juxtapositions the right and left frames of LROC NAC M117881169 observation, January 11, 2010 (LRO orbit 2505) can be seen. This view also demonstrates a marked improvement in LRO photography over a relatively recent low-resolution background image [NASA/GSFC/Arizona State University/Google Earth v.5].

Just to the north of the WAC context image, there is a small wrinkle ridge ring (not nearly as large as the one in Mare Crisium). This wrinkle ridge ring formed when the compressive stresses creating the wrinkle ridge were changed by the presence of a buried crater. Tectonic features are influenced by regional, large-scale stresses (many 100s of km) and localized, smaller-scale stresses (10s of km). The presence of long wrinkle ridges in the mare are primarily the result of the regional stresses, probably caused by the weight of many layers of extruded basalts. The formation of tectonic features can also be influenced by local stresses, which may result from the presence of a particular geologic feature such as a buried crater or a hill. When features such as these exist, their localized stresses are greater than the large-scale regional stresses. This change in dominating stress field explains how a wrinkle ridge ring forms. 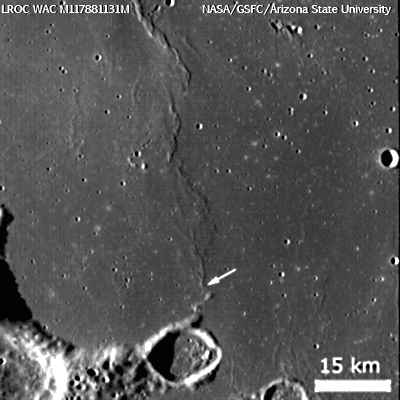 How many boulder fields can you find on the wrinkle ridge in the full LROC NAC frame?
Posted by Joel Raupe at 9:22 PM