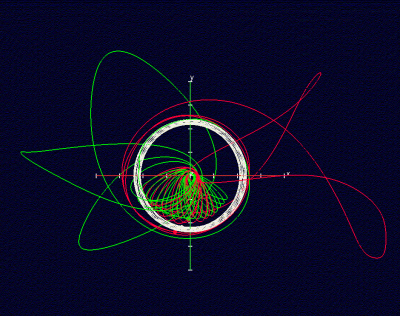 THEMIS P1 (TH-B) in red and P2 (TH-C) orbit between the beginning of it reconfiguration and October 2010 when after capturing the Lagrange points between Earth and Moon. After six months in those orbits, P1 and P2 will be inserted into lunar orbits where they should make measurements of the lunar wake, the magnetotail and the solar wind through September 2012 [NASA/GSFC/UC/THEMIS].
Irene Klotz
Aviation Week

NASA has yet to authorize funding for Artemis (Acceleration Reconnection and Turbulence and Electrodynamics of the Moon’s Interaction with the Sun), but there was no time to wait. Left in their previous orbits, the satellites would have fallen into prolonged periods of deep shadow that likely would have resulted in their demise.

“We started thinking of different methods for saving them – even before they were launched,” says Themis principal investigator Vassilis Angelopoulos, with the University of California at Berkeley. “We realized that if we had enough fuel to change their orbits, the Moon’s gravity would start pulling them up.”

With preliminary approval from NASA’s 2008 Heliophysics Senior Review Panel, the two outermost Themis probes began low-thrust lunar orbit insertion maneuvers on July 20, 2009. The first will reach a preliminary orbit in August, with the second to follow in October. The recycled spacecraft will become the first identical duo to study the Moon and its environment.

From their new vantage points in front of and behind the Moon, relative to the Sun, the satellites will continue to support the Themis (Time History of Events and Macroscale Interactions During Substorms) mission with collaborative studies, but their main focus will be on solar wind and lunar environmental research. The new initiatives, slated to begin in April, include studying solar wind turbulence and charged-particle acceleration; looking at how reconnection releases solar energy stored in the Earth’s magnetotail; probing the cavity created when solar wind blows around the Moon; determining the composition of the lunar surface by studying particles that have been blown off the surface into space; looking for structure in the surface magnetic field of the Moon; assessing the Moon’s internal structure by measuring how it impacts magnetic fields in space; and measuring electric fields near the Moon, which levitate dust and send it into space.

The satellites would remain in lunar orbit for 18 months. At the end of the Artemis mission, the spacecraft would be maneuvered into a controlled crash onto the lunar surface.

“We hope that the science will be exciting enough to warrant additional funding … It’s really peanuts compared to what it would cost for new spacecraft,” Angelopoulos said.

The Themis team has ideas for follow-on missions for the remaining probes as well. “The others have enough fuel to do other very useful things, such as combining them with future missions like MMS [Magnetospheric Multiscale Mission, scheduled to launch in 2014]. We keep reinventing ourselves,” Angelopoulos says. 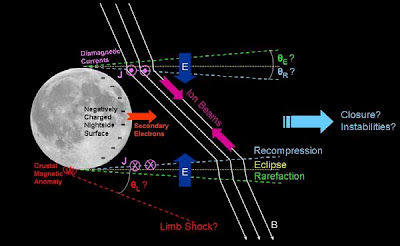 Acceleration, Reconnection Turbulence, and Electrodynamics of Moon's Interaction with the Sun (ARTEMIS), with its full complement of charged particle, magnetic and electric field, and wave measurements, can provide multi-point measurements of the wake over a wide range of downstream distances for varying solar wind conditions and to address the wide array of phenomena that occur in the lunar wake. The newly reassigned probes will spend four days per month, from October 2010 to September 2012, in the magnetotail. P1 and P2 will observe the plasma sheet from 20 to 30 hours per month, each collecting 2400hrs of magnetotail data, including 500-700hrs in the plasma sheet; more than enough to characterize this region of space and define its variability at unprecedented time resolution (burst mode) and with well inter-calibrated instrumentation. From vantage points spanning kinetic to global phenomena, ARTEMIS will revolutionize our understanding of particle acceleration, the nature and effects of reconnection and the drivers and effects of turbulence in Earth’s distant magnetotail [NASA/GSFC/UC/THEMIS].
Posted by Joel Raupe at 2:08 AM