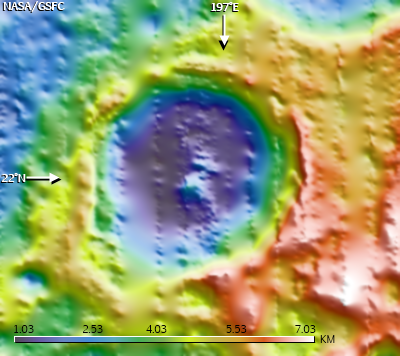 Bright rays streak for hundreds of kilometers across the lunar surface, originating from a large (70 km-diameter, or ~43 mile-diameter) impact crater in the far side's northern hemisphere. Jackson crater's rays are prominent in visible images, as the rays are made from brighter (or higher-albedo) material than the darker lunar regolith that they overlie. Because they are very thin, they do not appear in LOLA's topography data. What you can see in the elevation data is the morphology, or shape, of Jackson's main crater. The bright reds in along the southeast rim highlight the section with the greatest elevation; the western half of the crater rim is much more subdued. 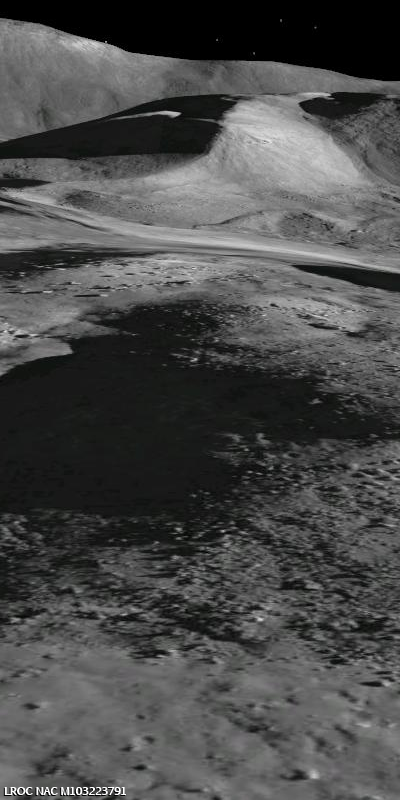 Looking south from the interior of Jackson crater, looking due south toward the lofty south rim, over the blocky central peak complex; aspects of Jackson properly photographed at last, early in the Commissioning of the Lunar Reconnaissance Orbiter mission. LROC Narrow Angle Camera observation M103223791, from 141.66 km in LRO orbit 381, July 26, 2009 [NASA/USGS/JAXA/GSFC/ASU].

The highest portion of Jackson crater's rim reaches 3.3 km, 2.8 km above the lowest elevation on the crater floor. Terraces step downwards into the crater's interior. One place this is particularly evident in this image is in the west - try tracing along the highest portion of the rim (in the orange color), and then find another series of peaks that outline a terrace ridge (in the green color) just inside the crater. The northwest and eastern sections of the rim are somewhat unusual, as they are relatively straight.