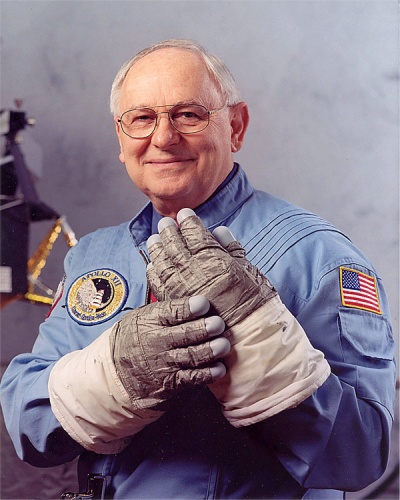 Apollo 12 lunar module pilot Alan Bean, active as a renowned artist and speaker, 40 years after he became only the fourth human to walk on the Moon (November 1969).
DAYTON, Ohio — The pilot of the lunar module for the second moon landing is among four people newly inducted into the National Aviation Hall of Fame in Ohio.

Capt. Alan Bean, of Apollo 12's November 1969 moon mission, discussed the landing Saturday at an induction ceremony in Dayton. The 78-year-old from Houston recalled looking out the window of the 6,000 mph spacecraft as it circled the moon 45 miles below.

Also enshrined were: Clay Lacy, a business aviation entrepreneur and cinematographer; the late Warren Grimes, called the "father of aircraft lighting" and an inventor of navigation instruments; and, the late Noel Wien, Arctic flight expert and Wien Alaska Airlines founder.

They joined 203 previous inductees in the hall founded in 1962 in the hometown of the Wright brothers.
Posted by Joel Raupe at 9:14 PM