How common are mare pit craters? 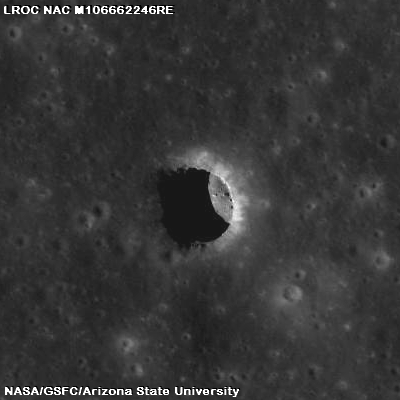 The Kaguya team discovered three mare pit craters, all about 100 meters in diameter. Since the Kaguya Terrain Camera had a pixel scale of about 10 meters they could not definitively identify pit craters much smaller than 100 meters. This raises a key question - are there smaller pit craters to be found? The answer is most likely yes.

The LROC team is searching images that are already on the ground and is targeting areas around pits for more coverage. To date, we have about ten candidate pits awaiting confirmation. 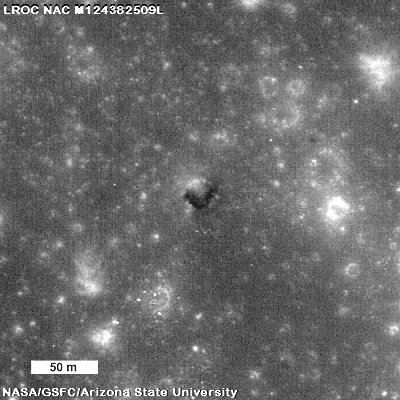 Possible small (25 meter diameter) pit crater in Mare Tranquillitatis observed under high Sun (3° incidence angle). This feature is about 200 km NW of the large pit shown in the opening image. From LROC NAC M124382509L [NASA/GSFC/Arizona State University].
How and when did pit craters form? On the Earth volcanic pit craters are formed as the roof of a lava tube collapses, often while magma is still flowing underground. The resulting opening is often termed a skylight. Can we determine if the lunar pits formed during or after the mare lavas flowed? Perhaps the best place to start looking for evidence is on the pit crater floor. If the crater formed long after eruptions had ceased and the subsurface lava tubes were cold, you might find a chaotic pile of rubble on the floor. If the pit collapsed into an active lava tube you might find the smooth, frozen surface of the last lava to flow through the tube. 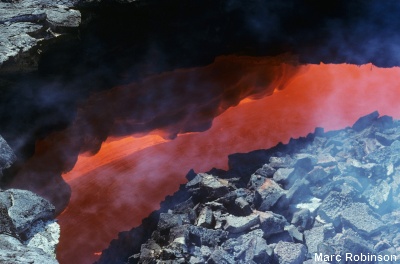 View down a skylight revealing magma racing through a lava tube in Hawaii. When lava stops flowing in tubes it cools and forms a smooth surface [photo by Mark Robinson].

The floor of the larger pit does look smooth, but the image of the smaller pit does not have high enough resolution to give a clear picture of the interior. One might infer that the larger pit was formed as an underlying tube was active, though at this stage such a conclusion would amount to healthy speculation. The LROC team is planning to acquire stereo images of the large pits and smaller ones that are now being discovered. The detailed topographic data will allow scientists to confirm the origin of these fascinating pits. Additionally, the LROC team will acquire images at a slant attempting to look for overhangs that might indicate the lava tubes are still open and accessible. Keep checking in as this exciting story unfolds. 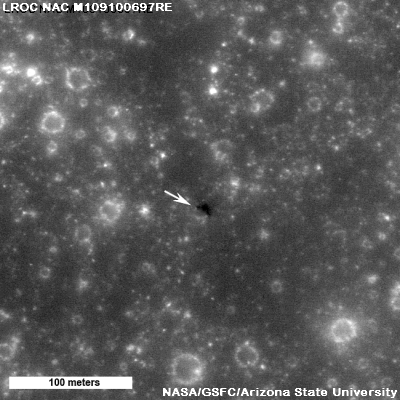 Explore on your own. 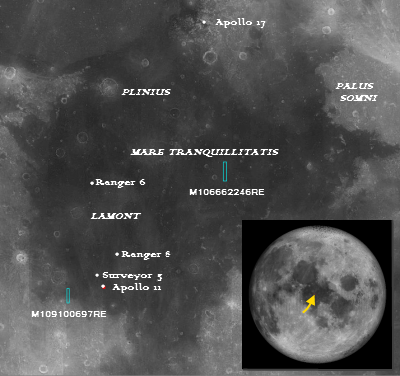 Low-resolution context for two of the three Lunar Reconnaissance Orbiter (Narrow Angle) Camera observations of verified and unverified mare crater pits within Mare Tranquillitatis. (One of the three highlighted by Dr. Robinson up above is not yet released to the Planetary Data System.) Format note: A near perfect "National Geographic-like" font stylizes the upper loop in the '8' of Ranger 8, and it has unfortunately made it appear Ranger 6 impacted the Moon at two widely different locations. Ranger 6 impacted the Moon at or near the northern designation February 2, 1964, though it's television camera had already failed after inadvertently switching on during a booster separation. Ranger 8 was successful, however, in returning televised images of the lunar surface up until the moment of its intentional impact, February 20, 1965; not far from the eventual landing sites of Surveyor 5 and Apollo 11 [Clementine 750nm- NASA/DOD/USGS].
Posted by Joel Raupe at 11:38 PM

The fault is an otherwise interesting font (Colonia). A second look may reveal a stylized upper loop in what should better resemble an eight than a six.