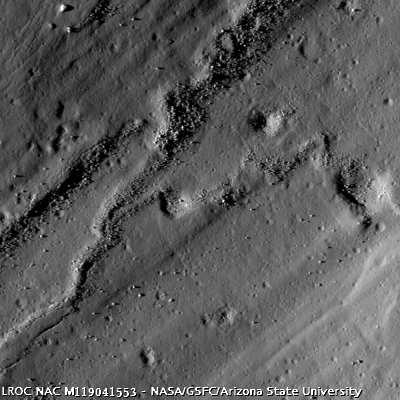 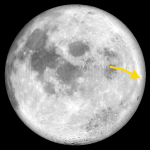 Large impacts are catastrophic events for the local area. Besides the huge craters they leave behind (this one is 30 km or 19 miles across), impacts heat portions of the crust to such high temperatures that rocks melt and flow like lava, as seen in today's featured image. These melts run downhill, cool and solidify, leaving behind beautiful flow features also highlighted in several past featured images. 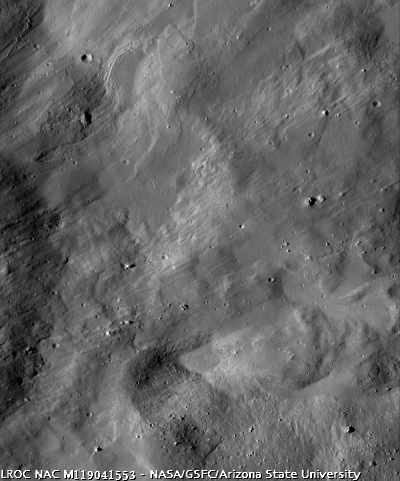 A reduced resolution view of the impact melt outside the eastern rim of Necho, from a mosaic of M119041553L/R; field of view = 5.3 km [NASA/GSFC/Arizona State University].

The scene above is a wider view outside the eastern rim of Necho crater (the detailed view in the first image is in the upper left corner here). Almost everything you see is coated in impact melt, which flowed from the crater, moving boulders along with it and ponding in small topographic lows, which now look like smooth, frozen lakes. What a sight this must have been shortly after the crater formed! 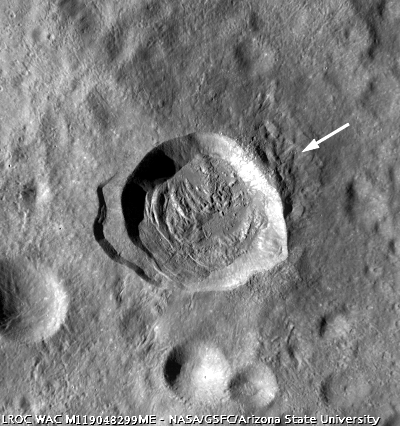 Impact melts play a key role in our understanding of when things happened on the Moon. As rock is melted and then cools and reforms, its internal radiometric clock is reset. By collecting a sample of impact melt scientists can very accurately determine when that crater formed. Since crater rays run out long distances we can determine the relative ages of rays, material that underlies rays, and rays that cross other rays. By sampling a few key craters scientists could easily unravel the absolute chronology of some key events on the Moon over the past billion years - a time not well sampled during the Apollo years. Sample return missions are a high priority for lunar exploration, and absolute age dating is only one of the many reasons why!

How many impact melt features can you see in the full NAC image of Necho? 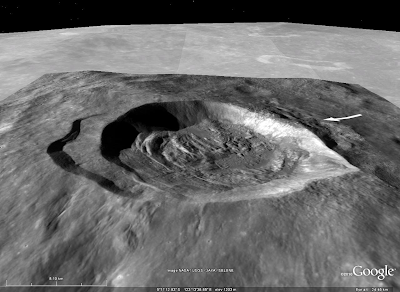