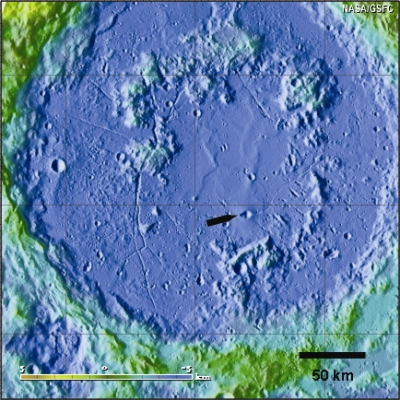 NASA GSFC - Schrödinger (centered -75.0˚, 132.4˚ E), located on the lunar far side and within South Pole-Aitken Basin, is not visible from the Earth. Crater counts suggest that the basin is less than one billion years old, making it the second youngest impact basin on the Moon (the youngest being Orientale).

LOLA data reveal that the basin has approximately 3.3 km of relief from rim to floor. The basin’s inner ring is clearly visible, as are lunar rilles, smaller impact craters, and a volcanic cone (see arrow). 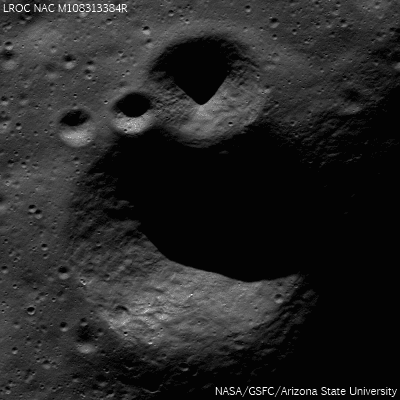 LROC Narrow-Angle Camera (NAC) closeup of clustered craters on the lip of the Schrödinger pyroclastic cone, a Constellation Region of Interest (ROI). Although believed to be relatively young, these craters have a subdued appearance, a texture smoothed by micrometeor 'gardening' typical of older lunar surfaces) because they formed in loose pyroclastic material. LROC NAC Frame M108313384R, this view is 785 meters across [NASA/GSFC/Arizona State University].
The cone is believed to be pyroclastic in nature, largely due to the dark halo that can be seen surrounding it in visible light images. The LRO narrow angle camera also captured a view of the cone. Additional evidence for volcanic activity comes in the form of rilles and the relatively flat and smooth basin floor, which is most likely the result of infill by lava flows.

More information and images available from "Craters on the Schrödinger pyroclastic cone," expanding on the Lunar Reconnaissance Orbiter Camera (LROC) Featured Image and commentary by Lisa Gaddis, April 24, 2010.
Posted by Joel Raupe at 5:00 AM