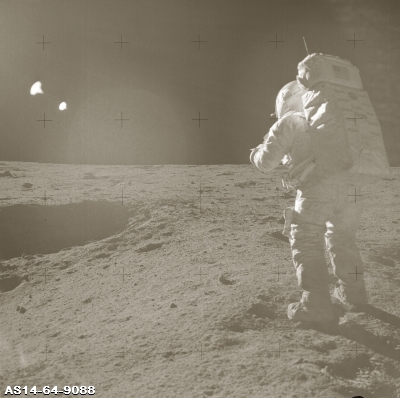 Apollo 14 lunar module pilot Edgar Mitchell surveys their map and looks for landmarks as Cmdr. Alan Shepard takes his picture, near the end of their unsuccessful walk to Cone Crater at Fra Mauro, February 1971. It was the first time an Apollo expedition had journeyed beyond view of their spacecraft [AS14-64-9088HR/NASA/ASJ].
Jim Wise
The Durham News

In February 1971, U.S. Navy Capt. Edgar Mitchell was lunar module pilot on Apollo 14, the third U.S. mission to land on the moon.

The sixth human to walk on the moon, Mitchell is a native of Hereford, Texas, and earned his doctorate in aeronautics and astronautics at MIT.

While in graduate school, he became interested in the research in "extra-sensory perception" pioneered by Duke University Prof. J.B. Rhine. Mitchell met and corresponded with Rhine and, while in space, conducted ESP experiments of his own which, he says, had positive results similar to those Rhine had had on Earth.

Mitchell was originally assigned to the ill-fated Apollo 13. Switched to the later mission, he and fellow astronaut Ken Mattingly simulated the roles of command and lunar module pilots during the efforts that brought Apollo 13's crew home safe.

During his own flight home, Mitchell had a mystical experience that radically changed his career.

"It was accompanied by this bliss, or ecstasy - a 'wow' experience," he said later.

According to his Website Mitchell "became engulfed by a profound sensation "a sense of universal connectedness. He intuitively sensed that his presence, that of his fellow astronauts, and that of the planet in the window were all part of a deliberate, universal process and that the glittering cosmos itself was in some way conscious."

Mitchell retired from NASA in 1972 and founded the Institute for Noetic Sciences to sponsor research into the nature of consciousness as it relates to cosmology and causality. He is also a strong advocate for changing humans' attitude toward the earth and for protecting its resources.

On Friday, he is speaking on "Sustainability" at the Duke Center for Living. His appearance is sponsored by the Rhine Research Institute, which J.B. Rhine established upon retiring from Duke in 1964. His talk is open to the public.
Read the Article, HERE.
Posted by Joel Raupe at 6:50 PM