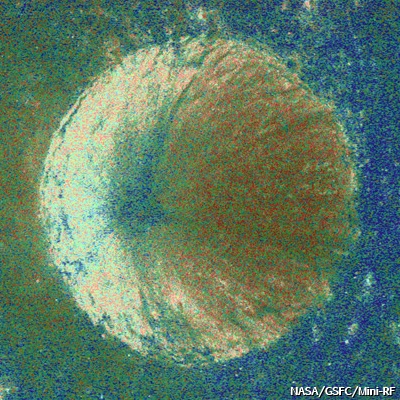 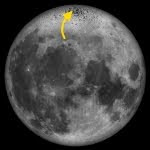 Investigators for Mini-RF, the synthetic aperture radar on-board NASA’s Lunar Reconnaissance Orbiter (LRO), recently imaged a potentially ice-rich crater near the north pole of the Moon.
Located at 85°N, 193.4°E, this permanently shadowed crater, about 8 km in diameter, is on the floor of the larger, more degraded 177 km Rozhdestvenskiy. With no sunlight to warm the crater floor and walls, ice brought to the Moon by comets or formed through interactions with solar wind appears to have collected there. 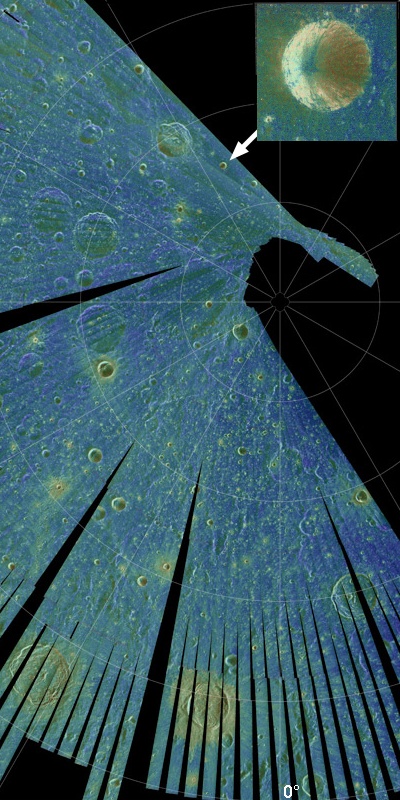 The crater was first identified as a region of interest during India's (ISRO) Chandrayaan-1 mission in2009, when it was seen to exhibit unusual radar properties consistent with the presence of ice.
With a resolution 10x better than the radar aboard Chandrayaan-1, LRO's Mini-RF allows NASA to see details of the crater’s interior.
In particular the circular polarization ratio (CPR) measures polarization characteristics of radar echoes, which give clues to the nature of the surface materials.
The inset figure shows a colorized CPR image of the crater. Red pixels have CPR values greater than 1.2. The CPR values inside the crater are almost all greater than 1, while CPR values outside the crater are generally low (much less than 1).
Regions with CPR greater than 1 are relatively rare in nature, but are commonly seen in regions with thick deposits of ice, such as Martian polar caps or the icy Galilean satellites. These are also seen in rough, blocky ejecta around fresh, young craters but in that occurrence scientists also observe high CPR outside the crater rim.
This crater has high CPR inside but low CPR outside. The Mini-RF team plans to examine data from the other LRO instruments, particularly temperature and topographic measurements, to better characterize the environment and setting of these unusual features near the poles of the Moon. 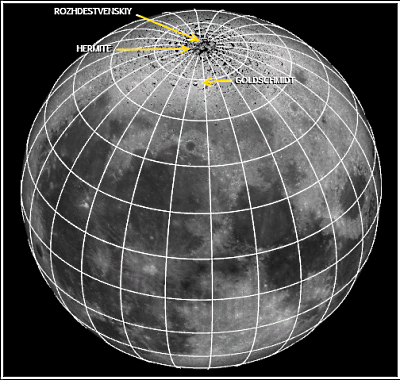