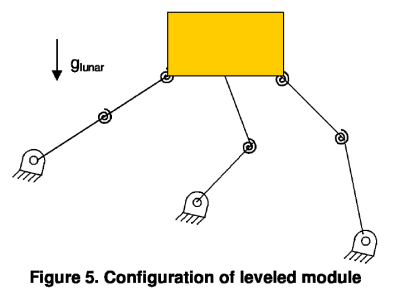 Once the lunar lander has touched down on the moon problems can occur if the crew module is not level. To mitigate, compliant landing gear provide a solution that would allow the module to be leveled once it has landed on some ground slope. The work presented here uses compliant joints, or flexures, for each leg of the module and optimizes the mechanics of these flexures such that the module can be passively leveled over a range of landing slopes.

"Among other potential issues caused by landing on a slope, such as difficulties while offloading cargo, is the concern of “fly-out” problems during ascent from the lunar surface.

"By considering the lunar module and its four deployable legs as a single spatial mechanism, the legs can be designed in a novel manner with the objective of passive self-leveling in mind."

Additionally, to avoid issues associated with lubricating joints this problem can be approached using compliant joints, or flexures, which are thin members that provide the relative rotation between two adjacent rigid members through bending.

Preliminary results suggest that for landing on a slope of up to 12 deg the effective slope of the module can be reduced to a maximum of 2.5 deg.