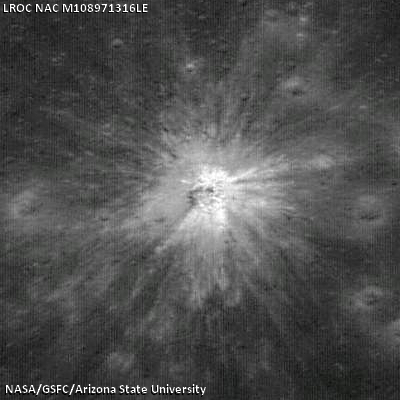 A new natural impact crater, less than 38 years old, definitively identified on the Moon. This small crater is not visible in orbital metric mapping camera images photographed during the Apollo 15 mission, it formed sometime during the past 38 years. The new impact crater is only ~10 meters (30 feet) across, but its bright ejecta extends much farther, making it stand out from all the nearby craters. (LROC NAC observation M108971316L, LRO orbit 1193, Sept. 9, 2009; alt. 47.19 km, res. 0.5; field of view above is ~120 meters) [NASA/GSFC/Arizona State University].
Ingrid Daubar
LROC News System 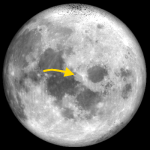 By comparing photographs from past eras of lunar exploration with the high resolution data being returned by the Lunar Reconnaissance Orbiter Narrow Angle Camera, we can identify new craters that have formed in the last four decades. In this case, bright ejecta and rays extend from an impact site that is not present in the previous image from the Apollo 15 panoramic camera. 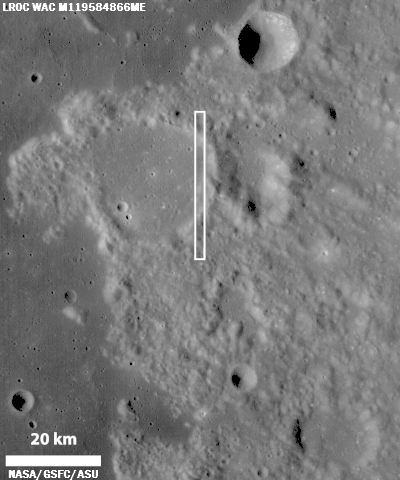 LROC Wide Angle Camera image M119584866M showing the approximate position, on the eastern side of Franz crater, part of the bright and rugged Palus Somni region on the Moon's Near Side, of the LROC Narrow Angle Camera observation (M108971316L) from which today's Featured Image was sampled. View the full-sized Wide Angle Camera image, HERE [NASA/GSFC/Arizona State University]. 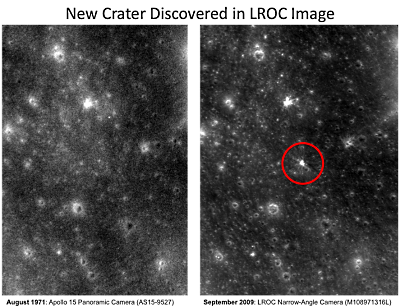 Comparisons by the LROC Science Team of images from the Apollo Panoramic Camera and the LROC Narrow Angle Camera will reveal impact craters that have formed within the past 38 years. View the full sized comparison, HERE. [NASA/GSFC/Arizona State University].

Using these two images as "before" and "after" views, we can conclude that a natural object (asteroid or comet) about 0.5 m (~20 inches) in diameter must have impacted the Moon here within the last 38 years. Note that this location (16.92° N latitude, 40.50° E longitude) does not correspond to a known impact site for any spacecraft.

The impact exposed fresh material from underneath the surface. Rays of this bright material extend far outward from the central crater, helping us to clearly identify it. The rays are actually more than 3x more reflective than the underlying basalts! Thus, even though the crater itself is only ~10 meters (30 feet) across, the bright markings would have been prominent in the high-sun Apollo image if the crater had existed in 1971.

Discoveries of recent, datable impact craters like these establish the present-day impact cratering rate on the Moon, which will lead to better understanding of the bombardment rate in the inner solar system. Meteorites of this size are a potential hazard to future explorers on the Moon or anywhere in the inner Solar System where there is no shielding atmosphere.

If we have a better sense of the current impact rate for this size of impactor, we can more effectively design habitats and hardware to protect human explorers. A crater this young has also not been modified by other processes, so we can study the appearance of features we know are extremely fresh. In addition, since ages are estimated using the number of craters present on planetary surfaces, knowing how many and how often craters are currently being produced will improve our understanding of the history of the entire Solar System.

Browse the whole Narrow Angle Camera frame HERE. Charles Wood, archivist of the Lunar Picture of the Day forum (LPOD) has added some personal notes about these discoveries, HERE. 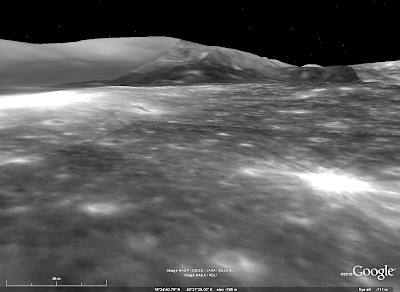 One of five new impact craters (right) discovered by the LROC team at Arizona State by comparing Apollo J mission orbital mapping photography with Lunar Reconnaissance Orbiter (LRO) Narrow Angle Camera (NAC) observations now being gathered four decades later. It's shown in "three dimensions" superimposed onto the digital elevation model (DEM) available to users of the Google Earth application. The bright and much larger impact crater on the left is about thirty meters higher in elevation, less than a kilometer to the southeast. Much further away to south the LROC NAC Observation M108971316 runs north over the rim and into the eastern interior of Franz crater, a landmark of the distinctive Palus Somni. Aspects of the immediate landscape perhaps affected by the impact and its subsequent shock wave that are perhaps visible in the two dimensional strip (below) imaged 41 km overhead may be better understood in the context of the uneven elevation. 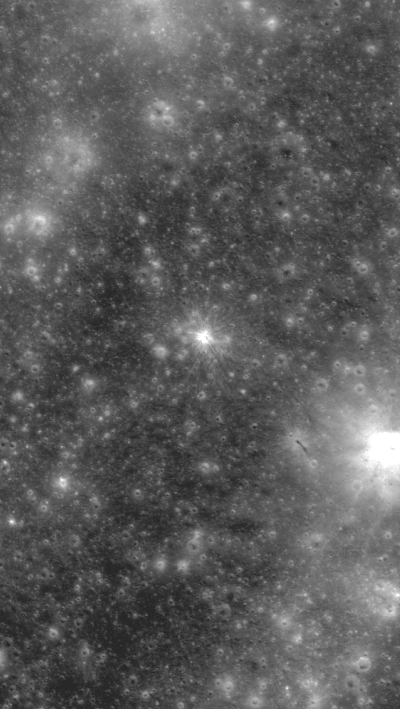