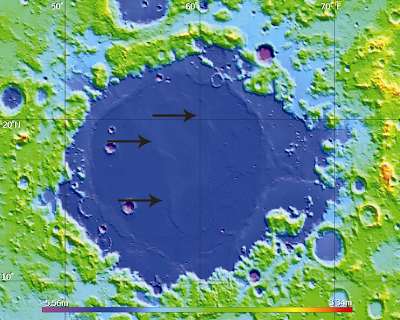 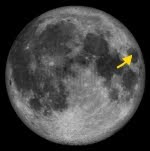 NASA GSFC - Located in the northeast quadrant of the lunar near side, Mare Crisium is a Nectarian aged basin that spans 740 km. LOLA data reveal that the floor of Mare Crisium is approximately 1.8 km below lunar datum, or "sea level," the Moon's global average elevation - while the outer rim is about 3.34 km above lunar datum.
Lava flow features are prominent enough in this mare that they can be seen in the LOLA topographic data (see arrows in image for locations of some of these features). 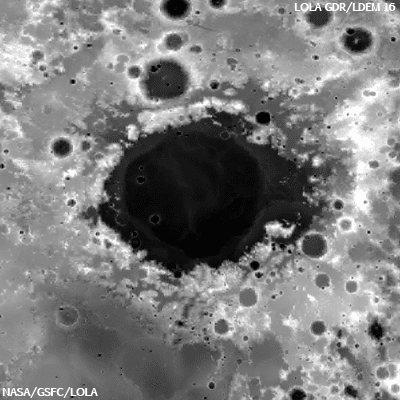 Brighter shades represent higher elevations in this early release of LOLA data showing the outer rings of the ancient impact. Palus Somni and the rays of Proclus on the basin's western extremes, so familiar to observers on Earth, are not so distinct in this digital elevation model [NASA/GSFC/MIT].

Mare Crisium is also the location of Luna City - a fictional city featured in the book "The Moon is a Harsh Mistress." 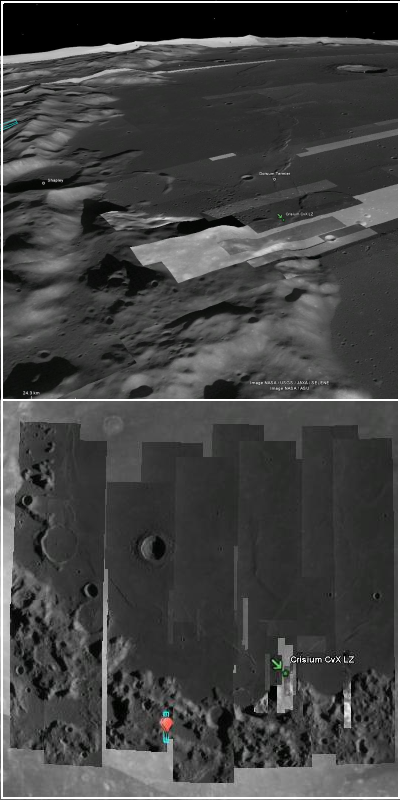 All or parts of eleven LROC wide-angle camera surveys and at least as many narrow-angle camera frames, contribute to this montage-in-progress centered on the Constellation Region of Interest at the confluence of wrinkle ridges near Dorsum Termier. The southern half of Mare Crisium is shown in stark relief. A wallpaper-sized image is available HERE [NASA/GSFC/Arizona State University/Google Earth].
Posted by Joel Raupe at 5:30 PM