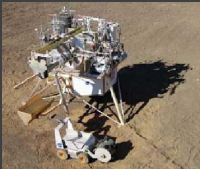 The NASA project to develop In-Situ Resource Utilization (ISRU) technologies, in partnership with commercial and international collaborators, has achieved full system demonstrations of oxygen production using native regolith simulants. These demonstrations included robotic extraction of material from the terrain, sealed encapsulation of material in a pressurized reactor; chemical extraction of oxygen from the material in the form of water, and the electrolysis of water into oxygen and hydrogen for storage and reuse.

These successes have provided growing confidence in the prospects of ISRU oxygen production as a credible source for critical mission consumables in preparation for and during crewed missions to the moon and other destinations. Other ISRU processes, especially relevant to early lunar exploration scenarios, have also been shown to be practical, including the extraction of subsurface volatiles, especially water, and the thermal processing of surface materials for civil engineering uses and for thermal energy storage.

This paper describes these recent achievements and current NASA ISRU development and demonstration activity. The ability to extract and process resources at the site of exploration into useful products such as propellants, life support and power system consumables; and radiation and rocket exhaust plume debris shielding, known as In-Situ Resource Utilization or ISRU, has the potential to significantly reduce the launch mass, risk, and cost of robotic and human exploration of space.

The incorporation of ISRU into missions can also significantly influence technology selection and system development in other areas such as power, life support, and propulsion. For example. the ability to extract or produce large amounts of oxygen and/or water in-situ could minimize the need to completely close life support air and water processing system cycles, change thermal and radiation protection of habitats, and influence propellant selection for ascent vehicles and surface propulsive hoppers.

While concepts and even laboratory work on evaluating and developing ISRU techniques such as oxygen extraction from lunar regolith have been going on since before the Apollo 11 Moon landing, no ISRU system has ever flown in space, and only recently have ISRU technologies been developed at a scale and at a system level that is relevant to actual robotic and human mission applications.

Because ISRU hardware and systems have never been demonstrated or utilized before on robotic or human missions, architecture and mission planners and surface system hardware developers are hesitant to rely on ISRU products and services that are critical to mission and system implementation success.

To build confidence in ISRU systems for future missions and assess how ISRU systems can best influence and integrate with other surface system elements, NASA, with international partners, are performing analog field tests to understand how to take advantage of ISRU capabilities and benefits with the minimum of risk associated with introducing this game-changing approach to exploration.

This paper will describe and review the results of four analog field tests (Moses Lake in 6/08, Mauna Kea in 11/08. Flagstaff in 9/09; and Mauna Kea in 1/10) that have begun the process of integrating ISRU into robotic and human exploration systems and missions, and propose future ISRU-related analog field test activities that can be performed in collaboration with international space agencies.