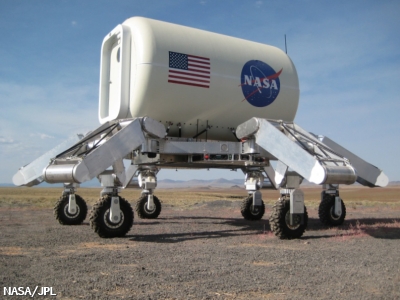 The Tri-ATHLETE vehicle is the second generation of a wheel-on-limb vehicle being developed to support the return of humans to the lunar surface. This paper describes the design, assembly, and test of the Tri-ATHLETE robotic system with a specific emphasis on the limb joint actuators. The design and implementation of the structural components is discussed, and a novel and low cost approach to approximating flight-like cabling is also presented. The paper concludes with a discussion of the “second system effect” and other lessons learned as well as results from a three week long field trial of the vehicle in the Arizona desert.

In order to establish a continual human presence on the Moon we must develop assisting infrastructure that can carry cargo as well as provide mobility to the astronauts for exploration and the development of a central, but not necessarily fixed, lunar base. The Tri-ATHLETE vehicle system is a new form of two cooperative robotic vehicles that can act individually or physically connect together through a structural pallet to transport and manipulate cargo.

The basis of the ATHLETE (All Terrain Hex Limed Extra Terrestrial Explorer) robot is the wheel-on-limb vehicle concept. This hybrid mobility platform enables the vehicle to traverse at high speeds across benign terrain, as well as enabling walking, by locking the wheels and using them as feet, on extreme terrain. This vehicle architecture also allows for manipulation since the vehicle is stable on three or more wheels. Non-adjacent limbs can be lifted and used to interact with the environment.

A tool mechanism at the end of the limb, attached to the wheel hub, allows for interchangeable tools, such as a gripper or an auger, to be used for manipulation. This unique vehicle design allows for significant weight savings over a traditional planetary roving vehicle that must have large wheels to allow for low ground pressure as well as high torque wheel actuators since the vehicle cannot walk in extremely soft or steep terrain. 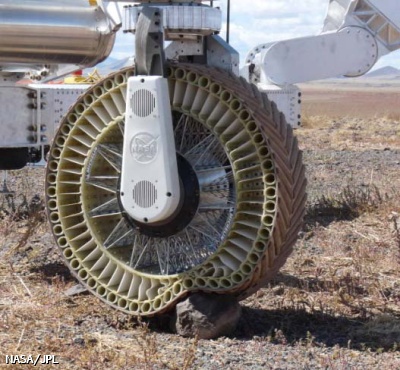 The ATHLETE project started in March of 2005. The first generation vehicle was completed in October of that same year. This 1000-kg, 2-m tall vehicle was developed rapidly with the intent of providing a hardware platform to aid in the development of the robotic system’s software. This software development vehicle ended up performing five field tests in natural terrain throughout the United States.

These field tests enabled the team to test the vehicle’s capabilities such as traversability over soft terrain, walking, repelling, and manipulation in unstructured environments.

From this first prototype several new capabilities were discovered and several vehicle deficiencies were revealed.
Review the presentation (PDF), HERE.
Posted by Joel Raupe at 2:07 PM