NASA@Science: "Down the lunar rabbit-hole" 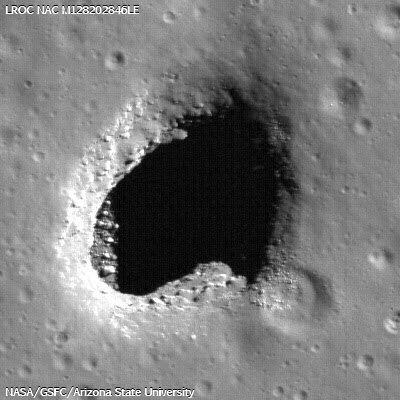 The 'skylight' in the middle of Mare Ingenii, on the Moon's Far Side, show a tantalizing view of house-sized boulders on part of it's barely illuminated floor in this LRO Narrow Angle Camera (NAC) observation, LROC News System Featured Image released June 16, 2010. Two kilometers wide, the Ingenni pit is twice the size of the skylight previously unveiled by JAXA SELENE-1 (Kaguya) investigators in 2009 - [M128020284LE, LRO orbit 4026, May 11, 2010 - NASA/GSFC/Arizona State University].


A whole new world came to life for Alice when she followed the White Rabbit down the hole. There was a grinning cat, a Hookah-smoking caterpillar, a Mad Hatter, and much more. It makes you wonder... what's waiting down the rabbit-hole on the Moon?

"They could be entrances to a geologic wonderland," says Mark Robinson of Arizona State University, principal investigator for the LRO camera. "We believe the giant holes are skylights that formed when the ceilings of underground lava tubes collapsed." 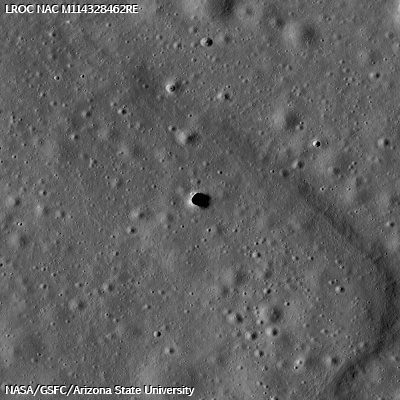 Situated a bend at the northwestern reaches of the unofficially named sinuous rille 'A,' near the heart of the widespread Marius Hills volcanic region in Oceanus Procellarum, the "Haruyama" skylight (unofficially named, for the lead investigator of the JAXA SELENE-1 (Kaguya) science team who first identified it) is wide enough to swallow The White House in Washington, DC (LROC Narrow Angle Camera observation M114328462RE; LRO orbit 1982, December 1, 2009; Alt. 45.38 km, Resolution = 50cm per pixel) [NASA/GSFC/Arizona State University].


Back in the 1960s, before humans set foot on the Moon, researchers proposed the existence of a network of tunnels, relics of molten lava rivers, beneath the lunar surface. They based their theory on early orbital photographs that revealed hundreds of long, narrow channels called rilles winding across the vast lunar plains, or maria. Scientists believed these rilles to be surface evidence of below-ground tunnels through which lava flowed billions of years ago.

"It's exciting that we've now confirmed this idea," says Robinson. "The Kaguya and LROC photos prove that these caverns are skylights to lava tubes, so we know such tunnels can exist intact at least in small segments after several billion years." 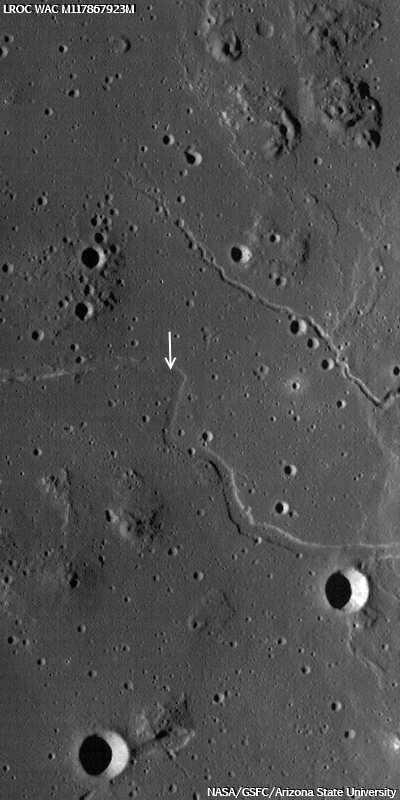 Context for the LROC NAC image of the Marius Hills 'skylight,' is LROC Wide Angle Camera (WAC) image M117867923ME, showing a 26 km-wide area in the heart of the Marius Hills. The white arrow designates the location of the pit, at the bend in "Sinuous Rill A." The location is almost directly situated between the two main volcanic vents of what China's Chang'E-1 orbiter team have labeled "Yutu," theorized to be an extinct single volcanic under the entire Marius dome region, a claim perhaps backed up by LRO (LOLA) laser altimetry data [NASA/GSFC/Arizona State University].


Lava tubes are formed when the upper layer of lava flowing from a volcano starts to cool while the lava underneath continues to flow in tubular channels. The hardened lava above insulates the molten lava below, allowing it to retain its liquid warmth and continue flowing. Lava tubes are found on Earth and can vary from a simple tube to a complex labyrinth that extends for miles.

If the tunnels leading off the skylights have stood the test of time and are still open, they could someday provide human visitors protection from incoming meteoroids and other perils.

"The tunnels offer a perfect radiation shield and a very benign thermal environment," says Robinson. "Once you get down to 2 meters under the surface of the Moon, the temperature remains fairly constant, probably around -30 to -40 degrees C." 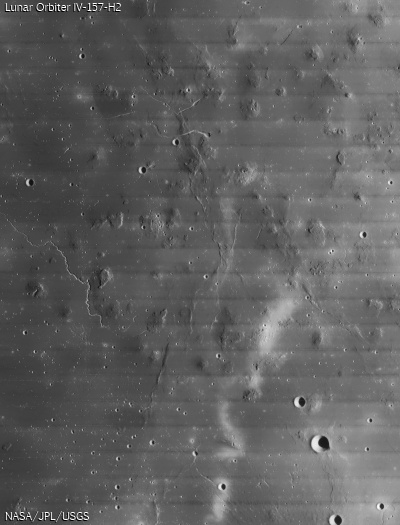 Lunar Orbiter IV (1967) photographed the Marius Hills region from 2668 km (1967,) shown in this "no dash" noise-reduction of the original image by the USGS Lunar Orbiter Digitization Project (not to be confused with the Lunar Orbiter Image Restoration Project, or LOIRP, who re-creating Lunar Orbiter images directly from restored telemetry). The sinuous rilles shown above are barely visible in the upper left center. Much detail from the original image is lost in the reduction to merely 400 pixels. Nevertheless, the larger context for the region-at-large is seen here, and the neighbors, including many of the Marius domes (visible with the Sun illuminating from the right, 27° over the eastern horizon. At center left is Rima Galilaei and the bright surface feature in the south is the frilly northeastern extremes of the Reiner Gamma albedo swirl phenomena, suggesting it also may be related to an extinct regional "Yutu" volcano; a very large part of Oceanus Procellarum. (Image width is about 160km) [NASA/JPL/USGS].


That may sound cold, but it would be welcome news to explorers seeking to escape the temperature extremes of the lunar surface. At the Moon's equator, mid-day temperatures soar to 100 deg C and plunge to a frigid -150 deg C at night.

Paul Spudis of the Lunar and Planetary Institute agrees that lunar lava tubes and chambers hold potential advantages to future explorers but says, "Hold off on booking your next vacation at the Lunar Carlsbad Hilton. Many tunnels may have filled up with their own solidified lava."

However, like Alice's Queen of Hearts, who "believed as many as six impossible things before breakfast," Spudis is keeping an open mind.

"We just can't tell, with our remote instruments, what the skylights lead to. To find out for sure, we'd need to go to the Moon and do some spelunking. I've had my share of surprises in caving. Several years ago I was helping map a lava flow in Hawaii. We had a nice set of vents, sort of like these skylights. It turned out that there was a whole new cave system that was not evident from aerial photos."

As for something similar under the lunar skylights?


"Who knows?" says Spudis. "The Moon continually surprises me."

This could be a white rabbit worth following.