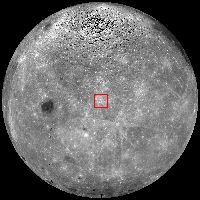 
The crater Moore F (37.4°N, 185°E ~ 23 km) exhibits a spectacular terraced rim and central uplift – a beautiful example of a complex impact structure. Surrounding the central uplift, the crater floor is covered by both frozen impact melt flows and debris. The melt formed as a result of the tremendous energy released in the impact event. As the crater equilibrated, the melt flowed to low spots and slowly cooled. What caused the spectacular curved cracks to form?

Perhaps the crater floor topography changed over time, fracturing the surface of the central melt pond deposit (right side of picture) and opening a series of parallel, arcuate tension (pull-apart) cracks. Or, perhaps as the melt cooled and solidified, the volume change opened the cracks. The LROC featured image on October 21 showed an adjacent portion of this same crater. Over time, LROC will image the whole crater allowing scientists to test these hypotheses and come to a clear understanding of how craters of this size form.