Ares I-X SRB may have been dented in-flight 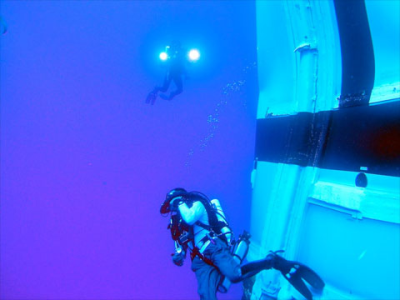 Underwater image showing a large dent in the lower segment of NASA's Ares I-X after splash down in the Atlantic, ending a test flight Oct. 28. [United Space Alliance].

NASA has discovered a large dent on its brand-new moon rocket after the booster splashed into the Atlantic Ocean at the end of a test flight this week.

The damage to the new Ares I-X rocket, which launched from Florida Wednesday on a short test flight, was spotted by a diving team sent to recover the booster's first stage. The first stage — a giant solid rocket booster — was dented near its base.

NASA spokesperson Amber Philman told SPACE.com that the space agency is still awaiting word on what may have caused the damage.
Read the story, HERE.
Posted by Joel Raupe at 3:25 AM