LCROSS not meant as entertainment 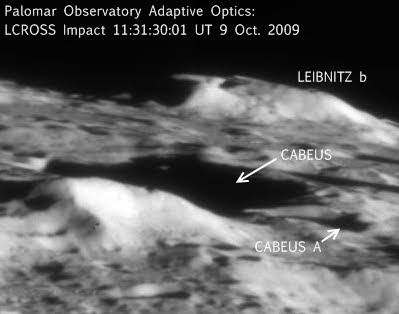 If you were counting on a mushroom cloud, this morning, you were setting yourself up for disappointment. No one was trying to 'bomb the Moon,' either.

Impacts like the one that blew out a crater perhaps a meter deep and thirty meters across when LCROSS struck the coldest, darkest interior of crater Cabeus, this morning, happen on the Moon frequently. What's the matter? Haven't you ever seen something hit the Moon before?

It's important to remember the LCROSS experiment wasn't meant as fireworks or entertainment. The event's results were detected, as planned, and a visible or nearly invisible plume both will help answer the questions this experiment was designed to resolve, but patience is needed as analysts tease the real information out from the chatter.

For perspective (and because I really have wondered what this looked like for a long, long time) take a closer look below, at the very bright, very fresh crater created by another upper stage, impact, this one from Apollo 14's Saturn V, spotted in September by Lunar Reconnaissance Orbiter and released by the LROC News System, yesterday.

The event that created this blister took place almost 39 years ago.

It was detected by seismometers left on the Moon by Conrad & Bean (Apollo 12, 1969) when it happened, and it rang the Moon like a bell for three full hours after it happened.

(A Comparison between the size of this impact and that of LCROSS is discussed, HERE.)

We've known, within meters, exactly where this crater was all that time, in southeast Oceanus Procellarum where the Sun shines two weeks out of each lunar day but this is the first time anyone has actually seen it. (These things take time!)

The big picture shows a lot of bright boulders in the area. Would we actually see twisted wreckage transformed into graffiti if we were to stroll through this man-made crater? 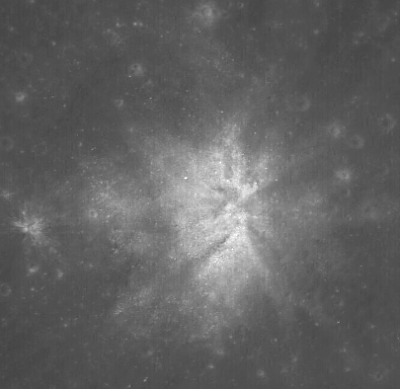 First Paragraph: "...interior of Cabeus as Palomar Observatory on Mt. Wilson used adaptive optics to capture the scene from California."

Actually it's called "Palomar Mountain" - there is no "Mount Palomar". Otherwise a fine essay which I've already advertised widely.

Yes, I don't know why I wrote Mount Wilson. Must have still had the Station Fire on my mind.

Appreciated the proof. "The secretary had the week off, along with the maid."

Thanks for the informational blog and pictures.