Paul Spudis: Caves on the Moon

The science team of the Japanese Kaguya mission have just published a paper claiming to have found an opening to a cave on the Moon. Such a discovery is a potentially important development for future lunar habitation. Lava tubes are large caves created during the volcanic eruption of a very fluid, highly effusive lava. They are common on Earth, especially in iron-rich basaltic lavas, such as those that make up most of the Hawaiian islands.

The idea that caves occur on the Moon has been around for a long time. We have long known that the lunar maria (the dark, smooth, relatively uncratered plains of the Moon) are made up of old basaltic lava flows. Looking at orbital photographs, we find many narrow, winding channels (or rilles) in the maria. These channels cannot be the product of water erosion, as flowing liquid water cannot exist in the vacuum of the lunar surface. So workers looked for another explanation. They found it in lava channels and tubes. 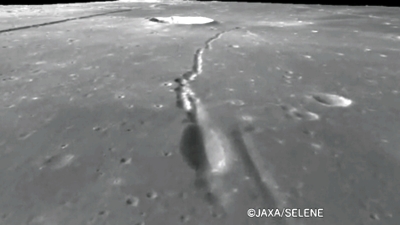 The cobra head of Rima Birt, a far smaller version of the more familiar feature on Aristarchus Plateau, in southeastern Mare Nubium. Rupes Recta, "the straight wall," and the crater Birt can be seen in the background of this image constructed from data collected by the Terrain Camera on-board Japan's Kaguya lunar orbiter. [JAXA/SELENE/LP]

On Earth, volcanic terrains often show small channels within young lava flows. Lava tubes form when hot lava erupts, pouring out onto the surface. The lava immediately begins to cool, with the outermost edges cooling first. As the lava cools and hardens from the outside edges inward, the flow of still-molten lava becomes constricted to a central, narrow, interior conduit. When the eruption stops, the still-liquid lava drains out, leaving behind an empty cave-like tube-shaped segment. In some instances, the roof of the drained tube collapses, exposing the tube interior as a channel or, if less extensive, creating a “skylight” or a hole that allows access to the cave interior. Lava caves are quite common on volcanoes made up of runny (low viscosity) lava, such as the shield volcanoes of Hawaii.

Caves found on the Moon would be very useful. Because they form in dense basaltic lava, the space inside a tube is protected from both the hard radiation of the lunar surface and the constant micrometeorite bombardment the Moon experiences. Moreover, the temperature of the subsurface of the Moon is very stable; below the zone which experiences the extreme temperatures of night and day, lunar temperatures are fairly constant at about -20° C. On Earth, lava caves can be quite roomy, with diameters tens of meters across and hundreds of meters long. On the Moon, these dimensions may be much larger – the low gravity of the Moon results in much bigger lunar lava tubes and channels than their terrestrial counterparts, being hundreds of meters across and many kilometers long. Thus, they offer many potential advantages to future lunar inhabitants.

Before we pack our bags for the Marius Hills, we should take note of some other properties of lava tubes. Many lava tubes partly or completely collapse immediately after their formation. If the roofed segments are weakened by flowing lava, earthquakes, or are very thin, they cannot support their own weight and after the lava drains out, the roof falls into the void. This is seen on both the Earth and Moon. Hadley Rille, visited by the Apollo 15 astronauts in 1971, is a lava channel, parts of which were roofed over as a tube. The crew landed near a channel portion, but a roofed segment is only about 12 km from the site. High resolution images of that segment show no entrance to an underground cave there or elsewhere along the rille (channel). That doesn’t mean that there is no cave portion of Hadley Rille, but it does suggest there is no entrance to a cave there.

Other candidates on the Moon look more promising. Numerous lava tube “skylights” have been noted in association with many lava channels on the Moon. These skylights are typically unconnected to each other or any nearby feature and are found as individual tube segments that appear to start and stop along the trend of a rille. It is impossible to identify lava cave entrances because most of the images we have for these features are low resolution and have near-vertical viewing geometry.

The new Kaguya pictures show a circular, rimless pit on the floor of the projected segment of a rille. Collapse pits are not uncommon on the Moon and many of them are not associated with lava channels or tubes. So while the new Kaguya images are intriguing, they are not definitive evidence for a cave.

There are other issues in regard to the use of lunar lava tubes. Many (if not most) terrestrial lava tubes are not void; they are either filled with late-stage lava, which plugs up the cave, or by collapse debris, which buries it. Finding a new void lava tube is celebrated by the caving community simply because void tubes are rare. But even if a void tube formed on the Moon, it may not remain that way for all time. Lunar volcanism was active over 3 billion years ago. Since then the Moon has been constantly bombarded by debris, initiating landslides, infilling craters, and generating seismic waves. Such a bombardment could well act as a leveler to collapse and fill in void lava caves that might have existed on the Moon.

But the biggest problem with lunar caves is even more fundamental – they aren’t where we want them. Sustained human presence on the Moon is enabled by the presence of the material and energy resources needed to support human life and operations around the Moon. After over a decade of study and exploration, we now know that these locations are near the poles of the Moon. Unfortunately, both poles are in the highlands and finding a lava tube in such non-volcanic terrain is highly unlikely, regardless of the imaginative ramblings of certain science-fiction authors. If a lunar cave were present there, we would certainly consider using it. But it makes no more sense to locate a lunar base near the caves, than it does to build a water-park in the Sahara desert.

The formation of lunar lava tubes and caves is an interesting scientific topic, but their utilitarian value is uncertain, at least until we have established a permanent presence on the Moon. Ultimately, we may be able to use them to live on the Moon, but first, we need to follow the Willie Sutton principle and go where the money is.

Paul Spudis wrote:
"But the biggest problem with lunar caves is even more fundamental – they aren’t where we want them."

Might a lava tube at -20c serve as a cold trap, sequestering rareified water vapor?

Speak for yourself - LOL!

I've always wanted to explore Domes Marius. Having a place to escape cosmic ray flux 105 percent higher than during solar max is a definite plus, and proximity to what are likely to be the Moon's second richest reserves of 3He, FeO, and TiO2, etc., even better in my warped imagination.

(An absolutely ingenious point, BTW, about a possible subterranean, "permanently darkened" Cold Spot volatile reserve. Would an impact of LCROSS, "smack-dab" down the throat of "Kaguya Hole" caused a cave-in?)