Crater not named for John Lennon, yet... 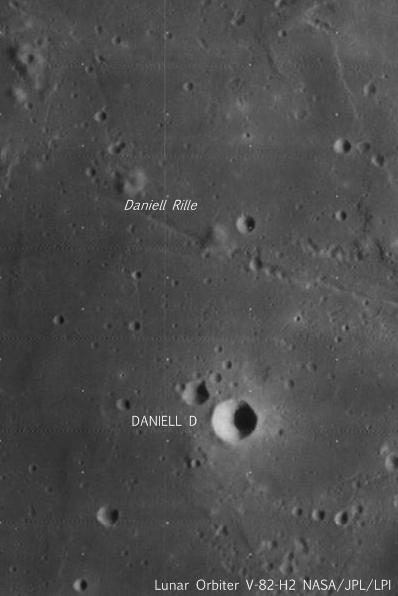 Lunar Picture of the Day (LPOD) on Oct. 11, 2009, as noted by Charles A. Wood of the long-established web wiki, was Lunar Orbiter IV-086-H2 (not yet restored by LOIRP) notes in passing news reports to the contrary notwithstanding, the bright 6 kilometer-wide crater Daniell D (35.97°N, 25.88°E) has not been named "John Lennon Peace" by an official-sounding mercenary organization called the "International Lunar Geographic Society."

Until the Moon declares its independence and a provisional government is established, such honors will continue to be bestowed by the internationally-recognized International Astronomical Union, or IAU.

Keep in mind that nobody voted to make the IAU's designations "official" -- the IAU banded together and decided on their own that they would be the "official" group to decide on planetary names.

And who really cares if the crater is called Daniell D (not "Danielle" as you wrote) rather than John Lennon?

Why not rename it? They're not renaming the primary Daniell crater, they're renaming a lowly satellite crater!!!!

Surveyor 5 is one of my favorite missions, setting down just 23 kilometers from Tranquility Base.

Thanks for the spell-check.

The IAU operates under treaty obligations and a congressional charter. So the answer to your question about who voted for those people would be the U.S. Congress, and similar deliberative assemblies throughout the world, some of whom are elected and others that are not. It's simply not correct to say the IAU banded together on their own. That's not what happened.

I would like to see a crater named after John Lennon.

Because I've been a Beatles fan since 1964, it would please me a great deal, though the genuine honor would be far greater to see a larger crater or formation named for him on Mercury, as is fitting with the standard decided upon long ago by the IAU.

This is likely to eventually happen, by the way, as well as the naming of one for George Harrison, Paul McCartney and eventually perhaps even Ringo Starr.

You confused me a little by pointing out that the crater in question is but a "lowly" secondary crater. I think Lennon deserves better.

Standardization of astronomical labels and coordinate systems is, for the most part, among those few international systems that serve an actual purpose, superseding language barriers among scientists and setting up a common frame of reference for work to proceed without undue confusion or interruption.

I can't say I agree wholeheartedly with all the decisions made by the IAU. It's doubtful an asteroid or a "proto-planet" or even a four billion year old lunar crater will be greatly moved by the gesture, regardless. Like Old Man River, they "just keep rolling along," heedless of whether it's generally known as the "Mississippi" or "Old Man Mud."

Being a solid champion of liberty, first and always, however, and deeply suspicious of elites of every kind, it make no difference if I agree or disagree with someone spending their own money, and not mine, on fattening the practice of sucker bait sales outfits.

That's entirely their own business.

I appreciate your comment and will fix the spelling errors as soon as possible. - JCR