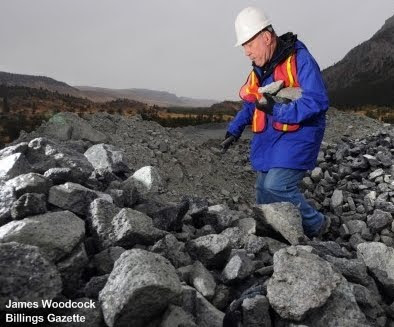 USGS project geologist Doug Stoeser looks through a huge pile of waste rock from the Stillwater Mine in Nye Wednesday afternoon. Stoeser is working in conjunction with NASA to find the perfect combination of minerals from mine waste to closely simulate a lunar surface to prepare for future moon explorations.

"Stephen Wilson, a USGS research chemist from Denver, said the agency knew where to find the material NASA sought. "Oh, go to the Stillwater,'' he said. "The Stillwater is one of the unique places that can do it. What is waste rock for the Stillwater mine is exactly what we want.''

"USGS began collecting the rock samples for testing in 2007 and so far has made five trips to the mine site. Wilson said it took two trips to find an outcrop -"a big block of really great rock''- that appears to have a higher grade of minerals. Another source of the regolith material is in the waste rock dug from the mine to get to the platinum-bearing ore.

"So far, USGS has collected 20 tons of Stillwater rocks and has processed 4 tons into regolith in Denver, Wilson said. The project is in the early phase, during which USGS is sampling and testing the rock for quality and consistency and to learn "what will and what won't work,'' he said.

"While artificial regolith has been made before, the new material is "unprecedented'' in its complexity and similarity to the regolith found at moon's southern pole, USGS said."
Read the feature story HERE.
Posted by Joel Raupe at 12:48 AM