From Lunar Orbiter V, a look at 92 kilometer-wide far side crater van'T Hoff (62.1°N,228.2°E) from 2,652 kilometers, over 59.72°N,248.5°W in 1968. Generally far from the orbital paths (also usually in darkness) during Apollo missions, until recently our only other best view of van'T Hoff was a single high-resolution image, also from Lunar Orbiter V (V-025-H2) spoiled in transmission or while being robotically developed. Perhaps the miracle-workers at LOIRP will one day salvage the image [V-025-M, NASA/JPL/LPI]. 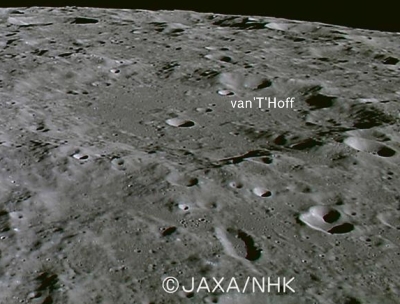 Forty years later, in 2008, while opening what may one day be called a new, second and international era of lunar exploration, Japan's Kaguya (SELENE-1) swept up van'T Hoff with its on-board HDTV camera [hdtv-002-5, JAXA/SELENE]. 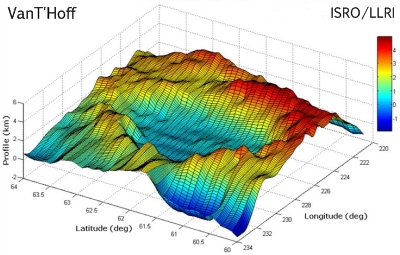 While it's mission ended with heat rather than a controlled crash, results from the Lunar Laser Ranging instrument on-board India's Chandrayaan lunar orbiter have recently been released. Along with details of van'T Hoff, profiles of enormous Bailly and Clavius have been posted together with Stebbins and small-scale results of surveys of both the northern and southern polar regions of the Moon [ISRO/Chandrayaan/LLRI].
Posted by Joel Raupe at 3:05 AM