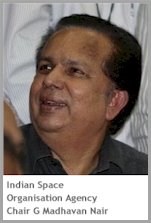 Bangalore, Oct 12 (IANS) India’s top space scientist G. Madhavan Nair has been elected president of the International Academy of Astronautics (IAA) at its general assembly in South Korea, the Indian space agency said Monday.
Nair, chairman of the state-run Indian Space Research Organisation (ISRO), has been vice-president of the IAA for four years prior to taking over the prestigious post Sunday at Daejeon in South Korea.
As an independent organisation of distinguished individuals elected by their peers for their outstanding contributions to astronautics and space exploration, the Paris-based IAA organises conferences and collaborates with other partner societies.

Nair, who is also secretary of the department of space, has been responsible for design, development and operationalisation of the indigenously developed polar satellite launch vehicle (PSLV).

During his four-decade long association with the space agency (ISRO), Nair held various positions, including director of the Vikram Sarabhai Space Centre (VSSC) and the Liquid Propulsion System Centre at Thiruvananthapuram in Kerala.

Under his chairmanship since 2003, ISRO has successfully launched 25 missions, including India’s maiden lunar mission Chandrayaan-1 in October 2008.
Posted by Joel Raupe at 1:22 AM