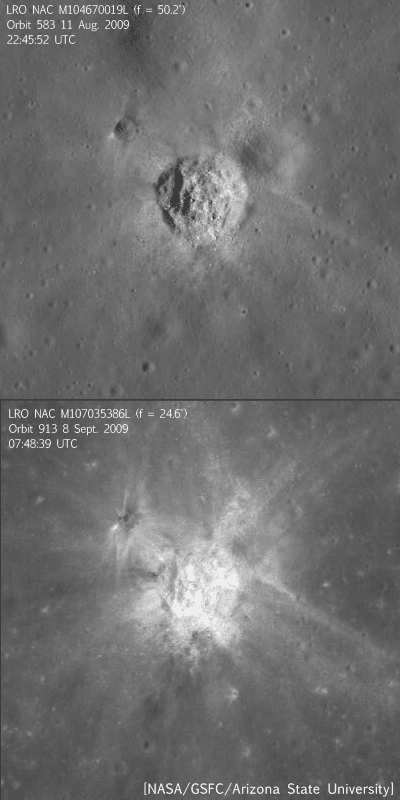 The same crater from two LROC Narrow Angle Camera (NAAC) frames under different lighting conditions taken just over a month apart. Above the Sun is low to the horizon while below the Sun is higher, late in lunar morning. Under low sun incidence surface topography and relief is more apparent in longer shadows, just as every observer of the Moon through a telescope can attest. Under a far higher sun, variations in brightness, or albedo, often testifying of a rfresh oughness that is less eroded than the vast and ancient basin [NASA/GSFC/Arizona State University].

These two images, subsets of M104670019L (with a solar incidence at an angle of 50.2°) and M107035386L (incidence angle 24.6°) illustrate effects of illumination, or phase angle, in recognizing different aspects of the same feature on the lunar surface. The scene is about 500 meters wide.
A the top the morphology of this small mare crater (200 meters in diameter) is clear, whereas in the image below differences in brightness (reflectance or albedo) are highlighted defining ejecta patterns. Explorers might prefer the low-Sun image for landing or planning traverses while the high-Sun image guides the eye to ejecta. One of the strengths of the LRO mission is that it passes over the same region numerous times and each time the Sun's angle is different, allowing LROC to build up an image set over a wide range of different lighting conditions.

This crater also illustrates the influence of pre-existing surface regolith structure on crater morphology. When the regolith, or looser material on the surface, is relatively thin over more-or-less intact bedrock small craters often do not have a simple bowl shape. This crater is filled with rubble, and there are numerous blocks up to 10 meters in size scattered around the rim and interior, indicating bedrock was excavated during the impact. In cases where impacts occur in thick regolith the crater does not excavate blocks but fine-grained material instead, resulting a nicely defined bowl shape.

Browse the low-Sun and high-Sun NAC images.
Posted by Joel Raupe at 8:09 AM