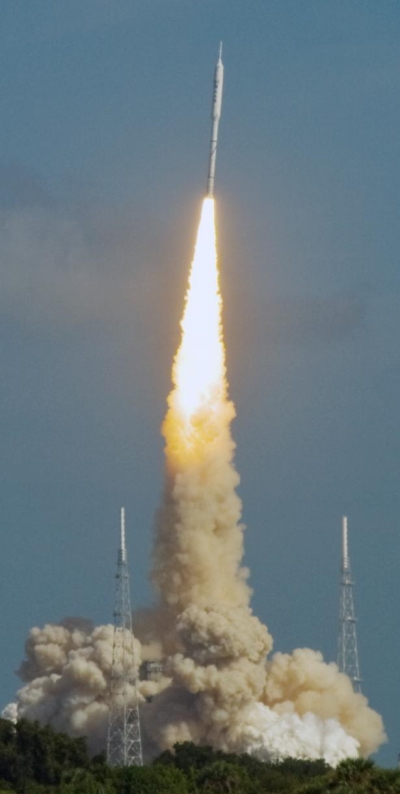 Outstanding teamwork was the theme of the Ares I-X postlaunch news conference as the successful flight test was discussed.

"I can't say enough about this team," said Doug Cooke, associate administrator for the Exploration Systems Mission Directorate at NASA Headquarters in Washington. "They've been together probably a little over three years now, and they went from a concept to flying this vehicle in that period of time, which is the first time this has been done by a human spaceflight team in a long time."

Referring to the weather, which was the only issue of the day, Constellation Program Manager Jeff Hanley said, "We were ready when Mother Nature was ready, and we took our opportunity and what a great outcome. We're very proud of the result."

"It was a spectacular day," said Bob Ess, Ares I-X mission manager. "The vehicle flew even better than we expected."

"It is just a fantastic day," said Launch Director Ed Mango. "The team really excelled. I can't say enough about the folks who worked together to go make this thing happen. It was a great team, and as you can tell, it was a great vehicle."

NASA's Ares I-X test rocket lifted off at 11:30 a.m. EDT Wednesday from NASA's Kennedy Space Center in Florida for a two-minute powered flight. The flight test lasted about six minutes from its launch from the newly modified Launch Pad 39B until splashdown of the rocket's booster stage nearly 150 miles downrange.
Posted by Joel Raupe at 6:38 PM