Impact Melt at Epigenes A 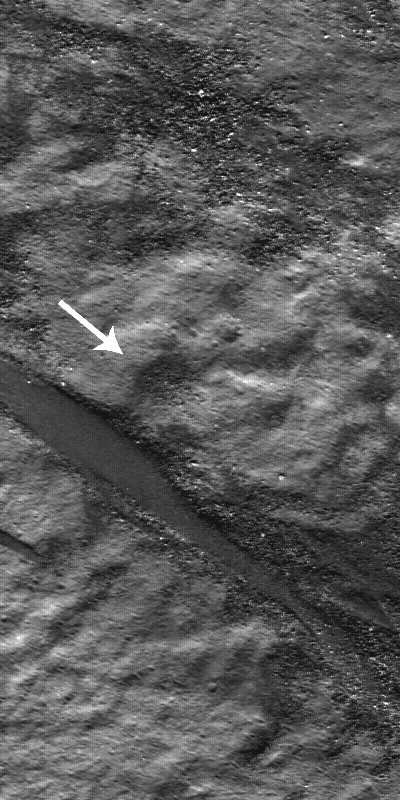 A plethora of boulders surrounds braided flows of impact melt along the inside wall of crater Epigenes A. As the melt moves toward the crater floor (direction indicated by white arrow), the flow buries and moves boulders. Epigenes A is a 18 km diameter crater located at 66.9°N and 0.3°W on the rim of crater W. Bond. The NAC image is 216 meters wide [NASA/GSFC/Arizona State University].

Within the Crater Epigenes A there are a remarkable variety of impact melt features. Impact melt is common and occurs when energy released by an impact causes rocks and regolith in the target to melt. Impact melts form small particles, known as impact melt spherules, or large, smooth pools and sheets of melt that coalesce in low areas within the crater. While the material is molten it behaves like lava, flowing down-slope. Emplacement of the melt is thought to occur during the excavation and modification stages of crater formation. An outward surge of impact melt (possibly caused by the collapse of the central uplift) falls on the rim, wall, and ejecta blanket of the impact crater and then gravity pulls the melt downward during the modification stage of the impact crater's formation. 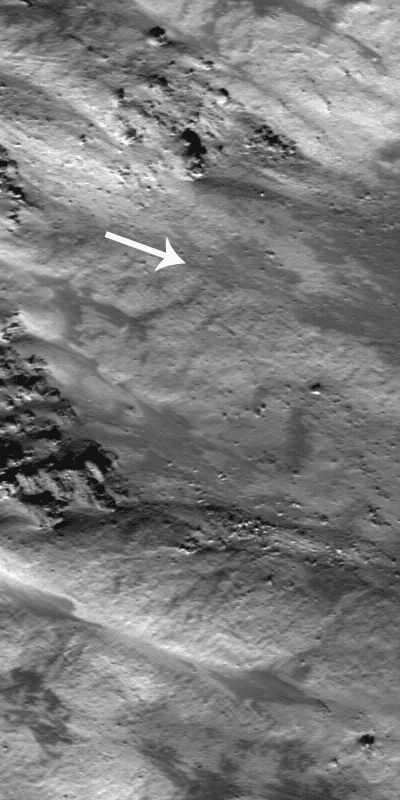 Impact melt (dark material) flowed around and over rocky outcrops on the upper portion of the crater wall. The white arrow points to the crater floor. The initial outward surge of material during the excavation of the crater threw impact melt near the rim and then gravity pulled the melt downward during the modification stage of the impact. The image is 216 meters wide [NASA/GSFC/Arizona State University].

Thin impact melt deposits are especially vulnerable to erosion on Earth, however, the Moon lacks erosive agents like wind and water, so the lunar surface is an excellent place to study impact melts. 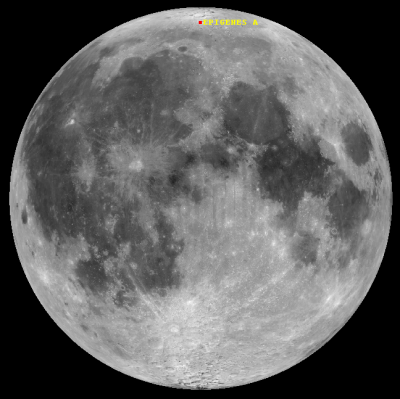