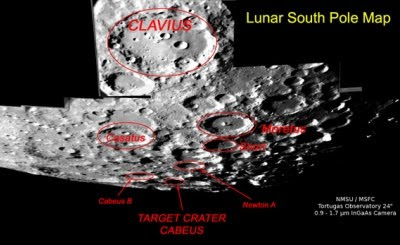 LCROSS impact area, favorably librated by the Moon's wobbly dance, reveals its underside in this image from the Tortugas 24' telescope of New Mexico State University, part of the professional side of the LCROSS Impact Observation Campaign. [NMSU/MSFC via UniverseToday]
Nancy Atkinson
Universe Today

"The LCROSS spacecraft is going to impact the Moon on Friday, October 9, and here's your chance to watch the action, either just for fun, or to contribute to scientific observations. Whether you want to observe with your own equipment or watch the event on television or a webcast, below you'll find all the information and links you should need to be a part of history. Amateur astronomers need a 10-inch or bigger telescope to make observations."

Guide to Seeing the LCROSS Impact
from UniverseToday.com
Posted by Joel Raupe at 9:16 PM

Excuse my ignorance but I am curious to know, how can they define the south pole?
The moon has no wobble or spin as do all the others, one of the poles may well be actually facing us.

Greetings, Mohamed. Thank you for your question, and there's no inexcusable ignorance other than deliberate ignorance. No forgiveness is necessary.

The Moon, as you know, always keeps one side facing Earth, so in the course of it's orbit it rotates essentially once in its relation to the Sun.

So, while it has been difficult to pinpoint with the finest precision until recently, the Moon has an axis that is actually less tilted than Earth's. Unlike Earth, with an axis around which it rotates each day that is tilted 23.45 degrees in relation to the Sun, the Moon's "obliquity" is 1.5424 in relation to the center of gravity shared with Earth, the barycenter of its orbit.

As a result, of course, we have our seasons here on Earth, and half an orbit around the Sun passed between those periods when our planet's poles stay completely shadowed or is constant daylight.

The Moon, however, has far less dramatic seasons. Parts of the Moon, particularly its deepest craters at those locations nearest the poles, experience permanent shadow.

And it is within one of those "permanently endarkened" depressions, one that is close to being the one that is farthest north from the South Pole of the Moon, where the LCROSS impact is set to occur in just a few hours.

This kind of impact is a frequent occurrence on the Moon. The best advantage of this event over those is we have had many months, now, of advanced notice of when and where it will happen.

My best regards to you, also.

Thank you so much

This is so exiting i did have contact Paul (LCROSS Flight Director) on his blog, A way to say People around the world are with you Sincerly i didnt expected a fast answer from there...

He was busy :) " I'm actually sitting on console now, so don't have much time. I'd like to try and briefly answer some of your questions:
2. As for the definition of the south pole, actually the moon does spin about an axis. Imagine this: as the moon orbits the Earth, the same side faces us all the time. Over a full orbit, to keep the same side facing the Earth, it has to rotate once. The axis about which it spins defines the poles in the same way the Earth's spin axis does."

Thank you very much