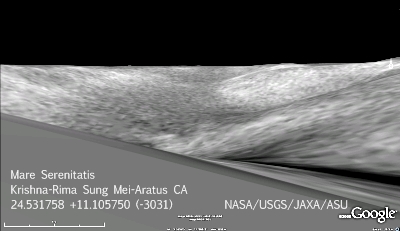 Glancing back at Vallis Lorus as seen from an eastern extreme up on the north side of the "lobe" rising between Rima Sung Mei (the shallow fissure with darker material moving off to the northeast and out of view) and Rima Krishna (to the left, and eclipsed by the lobe) over-looking a uniquely-shaped lunar valley in the western Mare Serenitatis.

Larger than it might appear, the western extreme above center is approximately 5.5 km away, and the deepest point in the valley floor, just barely out of sight below, falls away more than 300 meters below this "virtual" vantage point made possible by GoogleMoon. This close-up is combines Apollo science photography with laser altimeter data from Japan's Kaguya (SELENE-1) mission (2007-2009). [GoogleMoon/ASU/NASA/USGS/JAXA]

GoogleMoon, a virtual world within GoogleEarth, provides arm-chair lunar explorers a long-awaited way of experiencing the "ground truth" on our nearest neighbor, the chance to see vistas from the surface as only an astronaut can, though no astronaut yet has. There are limits to the availability of data from the latest international fleet of 21st century probes, however, presenting a slight problem to GoogleMoon users, while hinting at a solution to that problem that GoogleMoon might eventually provide.
Joel Raupe
Lunar Pioneer
Before long, you or an astronaut (or a taikonaut; some kind of Human Being, in any case) will stand and survey Vallis Lorus from it's eastern rim. I took a stroll there today, not just without my helmet but without my spacesuit. And this took far less effort than setting up my telescope and waiting for one of only two viewing opportunities each month - six days after a New Moon or five days after the Moon is Full - all the while wishing for a cloudless sky.

I took the picture (screen capture) above soon after hungrily devouring the latest "featured image" released by the LROC News System at Arizona State University.

Though this doesn't yet rival the unparalleled detail in Mare Serenitatis seen from Lunar Reconnaissance Rover (LRO) last August, it's pretty close to the perspective you or I might see standing on the Moon at this spot, or at least what I might see without my glasses.

The Japanese Space Agency (JAXA) demonstrated the potential when combining Kaguya laser altimeter and Terrain Mapping Camera data in 2008. Photographs taken from the ground by Dave Scott and Jim Irwin (Apollo 15) from edge of Hadley Rille with St. George Crater at the rille bend at the foot of the Montes Apenninus were juxtaposed against a similar perspective within a computer-generated virtual presence at the same location, and they matched perfectly. This offered best evidence to date that Scott & Worden were actually on the Moon in 1971, and showing the same scene captured by the color television camera mounted on their Rover.

The only thing missing was the kind of "edging," the smaller-grained material, small rocks and differentiated boulders, boot prints and dust now coming in from LRO. This is almost the same experience available today, in relatively small and narrow areas of the Moon, if you have GoogleEarth (v.5 and above).

Aside from the landing sites for Apollo 15 and 17, yesterday's featured release from LROC, highlighting Vallis Lorus ("Aratus CA," Oct. 3), is the first from LRO in the Apollo science-mission, high-resolution photography corridor of GoogleMoon, a strip of near side surface roughly 150 km wide stretching over 2700 km from southeast-central Mare Imbrium on the west to the south side of Mare Crisium on the east.

It's a good start but GoogleMoon won't really be fully released, as heralded in celebration of the 40th anniversary of Apollo 11 last July, until this same depth of resolution covers the entire virtual Moon.

While the Apollo science imagery, from Apollo 15, 16 & 17, did not cover the whole Moon it did cover much more than that featured in GoogleMoon at present. Even the lower resolution photography elsewhere in GoogleMoon would be vastly improved with the addition of Kaguya altimetry or, perhaps better still, LOLA laser altimetry from LRO.

The gently sloping terrain everywhere else but what is found within the single Apollo corridor or at the landing sites (probably altimetry from Clementine gathered in 1994, has a "here there be dragons" feel. It's bound to be a disappointment to young, would-be lunar explorers who want to scale Rupes Recta or the heights of the far side.

Finding out why GoogleMoon's developers stopped where they did, or more importantly if there are plans to complete the project in a timely fashion has proven to be elusive, though we are still trying and would welcome suggestions.

In the meantime, the astounding experience of exploring those areas within the high-resolution scenery is actually yielding new discoveries, and it is offering what might be a solution to a thorny problem patiently outlined by Dr. Harrison Schmitt. It's a solution to a problem which might also be at the root of why serious GoogleMoon explorers find themselves confined to restricted areas.

I will outline just what we mean in the next installment. 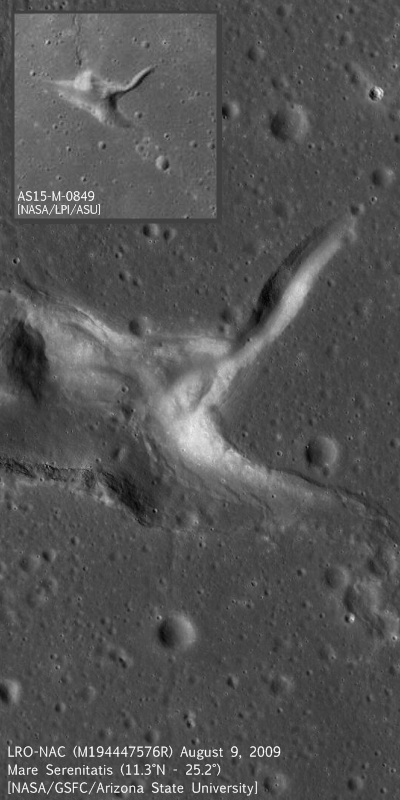