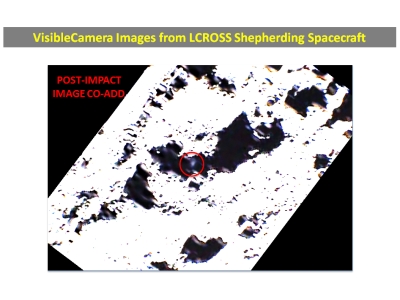 Result of three co-added, stretched LCROSS Visible Light Camera images taken within 15 seconds following the impact of the Centaur). The extent of the plume at 15 sec is approximately 6-8 km. Full Resolution [NASA/ARC/SSC]

NASA Ames, Moffett Field, CA: NASA’s Lunar CRater Observation and Sensing Satellite (LCROSS) was a smashing success, returning tantalizing data about the Centaur impact before the spacecraft itself impacted the surface of the moon.

Last week, plunging headlong into Cabeus crater, the nine LCROSS instruments successfully captured each phase of the impact sequence: the impact flash, the ejecta plume, and the creation of the Centaur crater. 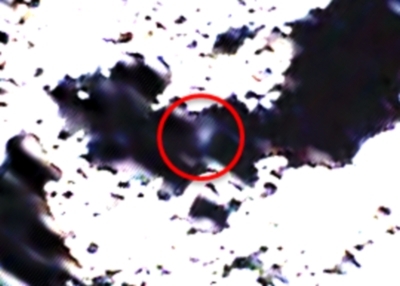 "We are blown away by the data returned," said Anthony Colaprete, LCROSS principal investigator and project scientist. "The team is working hard on the analysis and the data appear to be of very high quality.”

Within the ultraviolet/visible and near infra-red spectrometer and camera data was a faint, but distinct, debris plume created by the Centaur's impact. 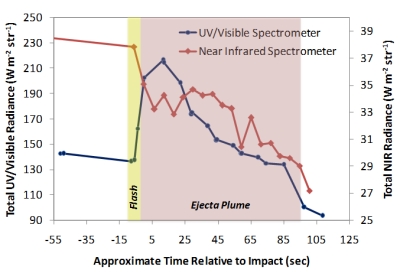 UV/Visible and Near Infrared down-looking spectrometers monitored the flash of the impact, the ejecta plume and ultimately the reflectance off the floor of Cabeus. The figure shows the total integrated radiance (integrated across all wavelengths measured by each spectrometer) as a function of time relative to the approximate impact time. The notional flash and ejecta plume periods are shown. Full Resolution [NASA/LCROSS/ARC].

"There is a clear indication of a plume of vapor and fine debris," said Colaprete. “Within the range of model predictions we made, the ejecta brightness appears to be at the low end of our predictions and this may be a clue to the properties of the material the Centaur impacted.”

The magnitude, form, and visibility of the debris plume add additional information about the concentrations and state of the material at the impact site. 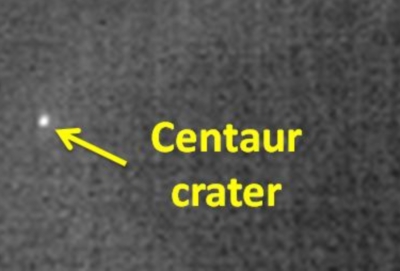 Mid-Infrared from MIR1, on-board the Shepherding vehicle, sensitive to wavelengths from 6.0 – 10.0 microns. The thermal signature of the impact is detected clearly by the MIR1 camera and is seen in subsequent images. The yellow arrow points to the thermal signature of the impact as detected by the LCROSS spacecraft (Resolution ~4 m/pix) Full Resolution [NASA/LCROSS/ARC].

The LCROSS spacecraft also captured the Centaur impact flash in both mid-infrared (MIR) thermal cameras over a couple of seconds. The temperature of the flash provides valuable information about the composition of the material at the impact site. LCROSS also captured emissions and absorption spectra across the flash using an ultraviolet/visible spectrometer. Different materials release or absorb energy at specific wavelengths that are measurable by the spectrometers.

With the spacecraft returning data until virtually the last second, the thermal and near-infrared cameras returned excellent images of the Centaur impact crater at a resolution of less than 6.5 feet (2 m). The images indicate that the crater was about 92 feet (28 m) wide.

"The images of the floor of Cabeus are exciting," said Colaprete. "Being able to image the Centaur crater helps us reconstruct the impact process, which in turn helps us understand the observations of the flash and ejecta plume."

In the coming weeks, the LCROSS team and other observation assets will continue to analyze and verify data collected from the LCROSS impacts. Any new information will undergo the normal scientific review process and will be released as soon as it is available. 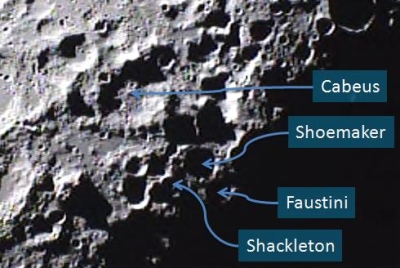 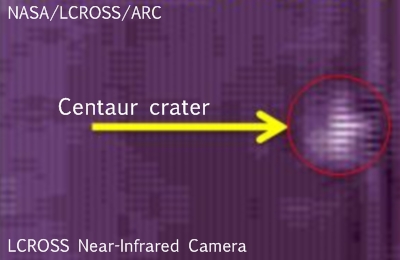 From the Near infrared camera (NIR2), sensitive to wavelengths from 0.9 – 1.7 microns. The near-infrared signature of the impact is also detected clearly by the NIR2 camera (Resolution is ~2 m/pix) Full Resolution [NASA/LCROSS/ARC].

To view the latest images from the LCROSS impacts, visit, HERE.
Posted by Joel Raupe at 10:43 PM

The resolution is fantastic, crystal clear! I am bewildered