'Once more around the Earth,' the final orbit of LCROSS 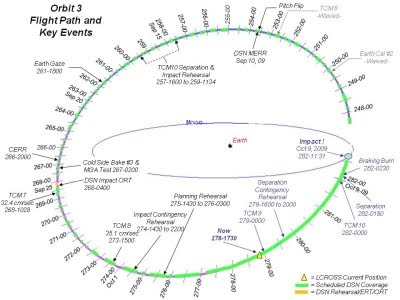 Ed. Note: The Moon looms large in our sky, but it's a hard target, literally, but especially if you've been crossing it's orbit at the distance from Earth where it will be this Friday morning, over and over, since July. And it is on Friday that the Moon, specifically the crater Cabeus, will be directly in LCROSS Flight Director Paul D. Tomkins' path, as no accident.

If all goes well, and it should, it will be no good luck alone enables Tompkins and his team to bid nearly instant goodbye to their spacecraft, first to the impacting Centaur, watched faithfully for around four minutes by an array of sensors aboard the separated Shepherding and Sensing satellite which will swiftly follow down its own path to destruction.

As we wait, now might be an excellent time to read Tompkins' own history-making final orbit of the LCROSS experiment.

(Since uploading the diagram below, in little more than a day LCROSS has accelerated a full third of the way closer to the Moon than Tompkins' yellow triangle indicating the LCROSS Current Position. Also, this last orbit began with a fuel leak 'anomaly,' undiscovered until it became a threat to the mission. The Flight Director picks up the story from there.)

The anomaly robbed the LCROSS Flight Team of precious time to prepare for Impact. But with a healthy spacecraft, and enough propellant to do the job, our team was all too happy to prepare for the future. Ahead of us were five more Trajectory Correction Maneuvers (TCM 6 – 10) to precisely refine our crater targeting, then Separation, Centaur Observation, Braking Burn, and finally, Impact. In the midst of our TCM series, the Science Team continued refining their selection our target – the specific crater, and the point within the crater - based on the latest data from other missions. As a final confirmation of the payload instruments, the Science Team also wanted to look at Earth one last time before Impact. On top of all that, we needed to practice those final two critical days as much as we could.

I saw the headline and said whhhattt?? then I saw the story and said oh....more money waisted...damn