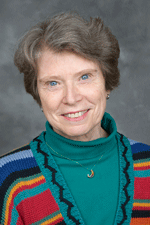 Water molecules have been found on the moon by a research team headed by Professor of Geology Carle Pieters (pictured, Left). But like many momentous scientific advances, the discovery was made almost by accident.

“You don’t expect any water on the moon,” Pieters said, and neither did her research team, which was studying lunar mineralogy. But when the team happened upon indications of water that at first confused them, they investigated further and discovered they were genuine.

“When our team saw a clear signature of water on the surface, we thought it was wrong,” Pieters said.

After months of probing and testing to try to resolve the disparity, the team later concluded that there are molecules of water and hydroxyl — a functional group consisting of hydrogen and oxygen — on the moon’s surface.

The team’s conclusion appeared in an issue of the journal Science alongside two other articles that concurred with Pieters’s findings. One research group’s instrument was on its way to Saturn and found similar readings using their spectrometer, while the other’s was on its way to a comet.

When the Indian Space Research Organization offered to carry foreign instruments on their Chandrayaan-1 spacecraft, Pieters and her team went to work on forming a detailed proposal to NASA to acquire funding to construct the instrument, known as the Moon Mineralogy Mapper, or M3. The project was accepted by NASA and the ISRO, and the Indian spacecraft containing the M3 launched successfully in October 2008.

With 10 months of data from the craft, the team was able to observe the water and hydroxyl molecules with a “unique detection using spectroscopy,” Pieters said.

“It is such a fantastic look at the way science works in the real world,” said Postdoctoral Research Associate in Geological Sciences Jeff Nettles. As a co-author of the Science paper, his role during the mission was to use software that processes and analyzes geospatial imagery to help analyze the surface.