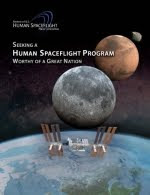 To get to the Moon, and eventually to Mars will take more money and technology than NASA has in its recurring availability, the committee concludes.

The committee made several recommendations to President Obama and Congress, including continuing the on-going retirement of the Space Shuttle fleet, extension of U.S. support for the International Space Station beyond present commitments through 2015 and continued development of Ares V and Orion, though it will become necessary to recognize that these new resources may not be available until 2017.

The panel said it might be an option to scrap Ares 1, though an initial first test of the configuration is now sitting on Pad 39A at the Kennedy Space Center, in favor or using existing boosters for eventual crew support.
Posted by Joel Raupe at 10:24 PM