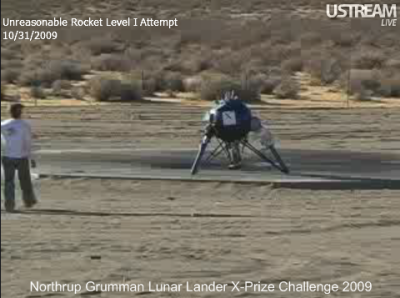 "Done for the day," after a long day of last minute technical challenges, "Blue Ball" comes down on target five seconds too soon after running out of fuel in flight. Though the feisty vehicle was only slightly damaged, the father and son team of the Breed family's Unreasonable Rocket group is out of options for achieving requirements for Level One of the Northrup Grumman Lunar Lander X-Prize Challenge. The team will go for Level Two with their "Silver Ball" precision lander, Sunday. [X-Prize/Unreasonable Rocket]
John Carmack of Armadillo Aerospace calls foul, raises level of controversy over an apparent unfair advantage to Mastin Space Systems by X-Prize judges
Keith Cowling
NASA Watch

"The rules have given the judges the discretion to do just about anything up to and including awarding prize money for best effort if they felt it necessary, so there may not be any grounds to challenge this, but I do feel that we have been robbed. I was going to argue that if Masten was allowed to take a window on an unscheduled day with no notice, the judges should come back to Texas on Sunday and let us take our unused second window to try for a better accuracy, but our FAA waiver for the LLC vehicle was only valid for the weekend of our scheduled attempt."