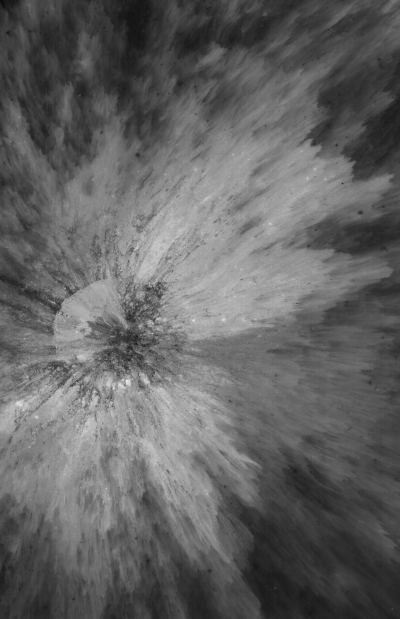 Ejecta of a fresh crater streams across the the lunar highlands south of Mare Tranquillitatis. Scene is 2.5 km across [NASA/GSFC/Arizona State University]

The crater above looks like any ordinary bright spot in lower resolution images, such as those from the Clementine mission (100 m/pixel). However, at high resolution (52 cm/pixel), extraordinary detail is revealed that will help us to better understand the complex series of events that occur during and after an impact event. In the first image, layers of ejecta stream out across the surface. Small craters churn up and expose both the fresh material within the ejecta blanket (those that appear bright) and reveal mature material from beneath it (those that appear dark).

[Ed. Note: The Images from the Lunar Reconnaissance Orbiter's Narrow-Angle Camera showing the impact crater from the Saturn-IVB stage of Apollo 14, below is a "striking example" of a mixed terrain, featuring halo craters, including the man-made crater formed in 1971.]

Together with the high spatial resolution of the NAC, the lighting conditions also contribute to make this an especially spectacular view. When LRO initially went into orbit, all of the images were acquired with the sun very low on the horizon, and even small features cast huge shadows. Over the next three months the orbit gradually transitioned to one where the sun was directly overhead at the equator, as in this image where the incidence angle is just two degrees. While low sun images are ideal for interpreting surface texture and topography, the high-sun images that LROC is currently acquiring enhance subtle albedo (brightness) differences on the surface, as can be seen in the the image above showing the jumbled interior of the crater, and the reduced-resolution view of the entire crater below. Many factors determine the reflectance of a surface, including composition, particle size, whether the soil is tightly-packed or loose and fluffy, and how long it has been exposed on the surface. At the site of a fresh impact such as this one, all of these factors can come into play.

The NAC is currently targeting many such small, fresh craters, giving us a new perspective on these amazing features.

Browse the full-resolution NAC image (or the LROC release).
Posted by Joel Raupe at 8:19 PM