Making an Impact (40 years ago) 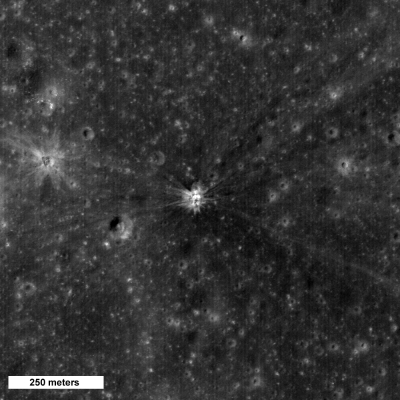 A distinctive crater about 35 m in diameter was formed when the Apollo 14 S-IVB (upper stage) was intentionally impacted into the Moon. The energy of the impact created small tremors that were measured by the seismometer placed on the Moon by Apollo 12 astronauts.

The interior of the crater has bright mounds and a bright ejecta blanket surrounds the exterior of the crater. Bright rays are observed to extend across the surface for more than 1.5 km from the impact. This image was taken when the Sun was relatively high in the sky (illumination angle of 25.1°) bringing out subtle differences in albedo (reflectivity or brightness). The Apollo 16 spacecraft first photographed this crater (Pan Camera frame 5451) and scientists noted the unusual occurrence of dark rays mixed with bright rays. Can you find the dark rays? 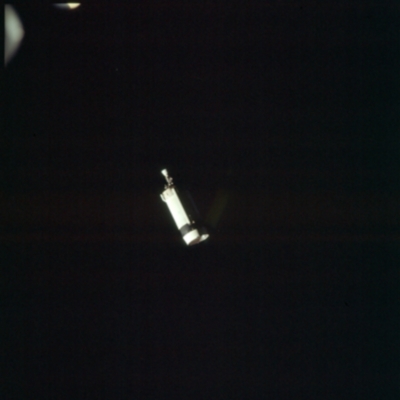 The upcoming LCROSS impact into Cabeus will also be used to probe the lunar subsurface. The Apollo 14 impact was used to send vibrations through the surface to help scientists study the internal structure of the lunar crust, the LCROSS impact will throw materials up into space so compositional measurements can be made of the subsurface from a trailing spacecraft and Earth-based telescopes.

The Apollo impact velocity was 2.54 km/sec and an angle of 69° from the horizontal along a heading of 103° (west to east). The S-IVB had a mass of 14,016 kg (30835 lbs) at the time of impact and impact energy was 5.54 x 1010 J (equivalent to just over 10 tons of TNT). The signal from the impact was recorded on the Apollo 12 seismometer; it lasted for about 3 hours. The LCROSS impactor (Centaur upper stage) is much smaller than the S-IVB and thus will make a smaller crater. The Centaur weighs about 2000 kg and will impact with a velocity of about 2.5 km/sec.

Roam around in the full NAC image comparing the S-IVB impact crater with others nearby.
Posted by Joel Raupe at 11:41 AM