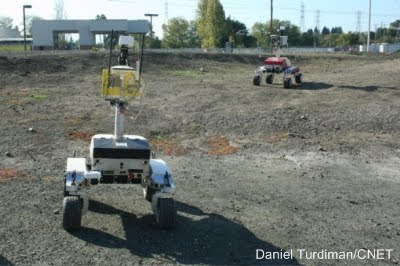 At NASA Ames Research Center, in Mountain View, CA two K10 rovers navigate a lunar-like landscape. The K10 program is designed to help NASA do more advanced surveys and surveillance of the moon, and for the time being, the robots are being deployed in a series of similar environments across the planet. [Daniel Terdiman/CNET]

MOUNTAIN VIEW (NASA ARC) - For a few minutes Thursday, as I steered one of NASA's K10 intelligent robots across a small field of rocky, sandy terrain, I could almost imagine myself piloting the rover across the surface of Mars or the moon.

Until, that is, I realized I had pretty much no idea what I was doing, and saw that my struggles to steer the rover forward were actually sending it backward. Given that this little robot is worth at least as much as a mid-range Mercedes, I was relieved to see the eagle-eyed scientist standing a few feet away from it as it approached a group of large rocks that could send it sprawling, a switch in his hand capable of stopping it dead in its tracks.

I was spending the afternoon at NASA's Ames Research Center here, talking with Terry Fong, the director of the Intelligent Robotics Group (IRG), about the K10 rover program--an initiative designed for remote scouting operations on the moon or Mars. To be sure, the program has been around for a few years, but Fong and his team are constantly tweaking the robots, and so what I got my hands on Thursday (remotely, at least) was a great deal more sophisticated than would have been the case just a few years ago.
Read the Story and view the Video HERE.
Posted by Joel Raupe at 12:12 AM