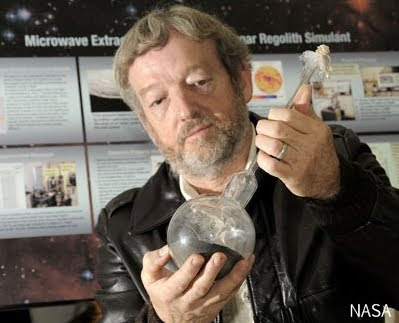 Last month, scientists confirmed the widespread presence of small amounts of water on the moon. This landmark finding was followed by NASA's crashing its LCROSS probe into a crater in the lunar south pole, generating data which is currently being analyzed to determine the extent of water present around the impact site. Water extracted from the lunar soil could be used to sustain life and to generate rocket propellant. PopSci.com spoke to Ed Ethridge of NASA's Marshall Space Flight Center, who has been studying how microwaves could be used to extract water from lunar soil.

The thermal conductivity of the moon's soil is very low, which was something that the Apollo astronauts found. So we can't heat the soil just by shining the sun's rays on it, they would just get reflected. The advantage of microwaves is that they penetrate and heat the soil from the inside.
Read the Interview HERE.
Posted by Joel Raupe at 7:01 PM